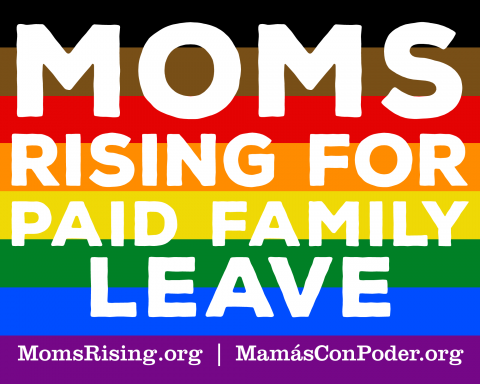 Celebrate Pride Month with our special MomsRising signs across all our issue areas! 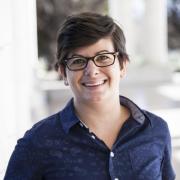 Erin Bennett Leighton
Share This
Add your voice to the comments

June is LGBTQ+ Pride month, and all of us at MomsRising are excited to celebrate—and we also recognize how much work we still have to do to reach full LGBTQ+ (lesbian, gay, bisexual, transgender, queer, etc) equality in our country.

→ Join us in celebrating Pride month and calling attention to all of the issues we still fight for every day with our special MomsRising Pride signs. You can bring them to any parade, event, or gathering near you—or, showcase them at home in a window or another spot!

This Pride month, let’s remember that policies that impact people in LGBTQ+ communities impact us all. LGBTQ+ people are parents, people of color, immigrants, and workers. While fighting for LGBTQ+ equality sometimes means fighting for specific rights—like transgender folks having access to changing their gender markers on their birth certificate - it also means fighting for equal pay, health care, a higher minimum wage, ending the school-to-prison pipeline, gun safety, maternal justice, and so much more. As Audre Lorde said, "There is no such thing as a single-issue struggle because we do not live single-issue lives."

Did you know that Pride month is celebrated in June to remember the Stonewall Riots of June 1969? These riots were a response to a police raid on the Stonewall Inn in Greenwich Village, Manhattan. The LGBTQ+ community responded with spontaneous demonstrations to call for safe spaces for members of the community, where people could be open about their sexual orientation and gender identity without fear of being arrested. Led by two transwomen of color, the Stonewall Riots are considered one of the most important events leading up to the fight for LGBTQ+ equality in the US and around the world.

While we have seen tremendous progress since June 1969—from marriage equality to states passing anti-discrimination laws and banning conversion therapy to same-sex adoption and so much more—many people in the LGBTQ+ community still feel unsafe in their own homes, communities, and states.

→ Here’s where you can help out!  Displaying a sign in your home or at a parade or rally helps show your support, raises awareness, and helps build safe communities. You can download your sign here.

Just last week, we all watched as the U.S. Supreme Court issued a ruling in favor of a bakery (Masterpiece Cakeshop near Denver, Colorado) that had refused to sell a wedding cake to a same-sex couple. Now, there is a lot of confusing information out there about this case. Some say it was a very narrow decision - but what does that even mean?! And how will our LGBTQ+ communities around the country be impacted by this decision?

So here’s the scoop: A same-sex couple in Denver went to the Masterpiece Cakeshop to get a cake for their wedding reception. When the bakery refused to sell them a cake because of their sexual orientation, the couple sued under Colorado’s nondiscrimination law. The bakery claimed that Constitutional protections gave it the right to override the state’s civil rights law and discriminate against the couple. The Colorado Civil Rights Commission ruled against the bakery, asserting that their discrimination was not protected under free speech or freedom of religion. When the case made it to the U.S. Supreme Court, the Court ruled solely on how the case was handled by the Civil Rights Commission. They raised concerns about comments made from some of the commissioners, which they believed to be based in anti-religion bias. Because of the bias, the court ruled that the bakery wasn’t treated fairly when the commission decided on the claim.

Confused yet? Our friends at the ACLU shared a really important analysis of this decision:

“But — despite arguments from the Trump administration and other opponents of LGBT equality — the court didn’t decide that any business has a right to discriminate against customers because of who they are. Instead, the court’s decision affirms again and again that our nation’s laws against discrimination are essential to maintaining America’s open society and that states can pass and enforce those laws, including in the context of LGBT people.”

So while the Supreme Court decision itself has no immediate impact on rights under the law, it is still possible that we’ll see backlash from opponents of LGBTQ+ equality as a result of this decision. This is why we must remain vigilant in our fight for LGBTQ+ equality.

→ Click here to download your own MomsRising Pride signs to show your support for LGBTQ+ equality and all of MomsRising’s issues and campaigns. Bring them to a parade, march, or rally -- or display them in your house all year long!

It’s also why it’s SO IMPORTANT that we all vote in every single election. Just a few months ago, some members of the Colorado State Legislature tried very hard to get rid of the Colorado Civil Rights Commission, largely because of the controversy over the Masterpiece Cakeshop case. Commissions like Colorado’s are essential to upholding protections against discrimination and harassment since many states offer stronger protections than federal law does. Luckily, the Commission was saved in the final hours of the 2018 legislative session in Colorado, but these are the kinds of attacks we should expect to see.

***Voting in every election, from the top of the ticket down to the local and state races, is critically important to protecting and expanding all of our rights.

This year as you celebrate Pride month, join MomsRising in lifting up all of the intersecting issues that the LGBTQ+ community faces every single day.

→ Download our Pride MomsRising signs to hang in your house, bring to your local Pride Parade, or carry at the next march or political action you attend.