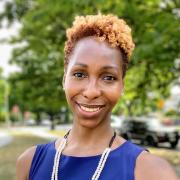 With a strong sense of commitment to public service, Namatie has volunteered her time in various capacities and was recently elected to serve as an Advisory Neighborhood Commissioner for single-member district 4C06 in the Petworth neighborhood of Washington, DC.

Namatie’s military service and background in community engagement, international relations, women and gender justice research, and international development has led her to co-author state and federal legislation, facilitate workshops and speak on panels related to care, caregiving and paid leave with a racial justice and gender lens.