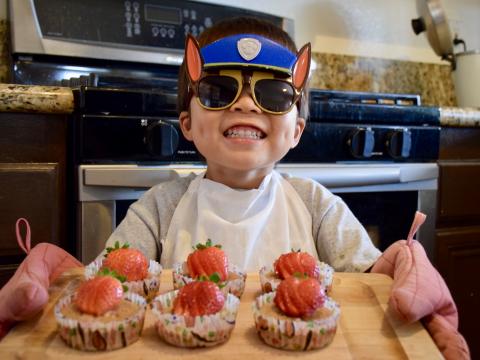 I like to satisfy kids' sweet tooth with healthy homemade snacks. It makes me very uncomfortable when I learned some teacher of my 5-year-old is giving out candy rewards.

No Candy Rewards in Classrooms, Please

A while ago, a teacher from my 5-year-old son’s Saturday Chinese School gave out candy rewards. My husband and I felt uncomfortable about this.

We have opinions about candy. I don’t eat candy. I don’t spend my grocery money on candies. With that being said, there is no candy under my roof. When my children were offered candies, I say no for them before the they were three. When my first child turned three years old, I first taught him what candy would do to him, and then taught him how to turn down unhealthy foods. However, at special occasion like some kids’ birthday parties, or when my child occasionally crave sweets, I wouldn’t completely forbid it. Sometimes I gave him a doughnut or ice cream treat, but no more than once a week. Everyone in the family knows that sugar intake should be limited.

Occasional candy is acceptable, but there is one thing that I strongly against: candy rewards. I disagree using candy as a reward, or holding candy as a punishment. I believe that food rewards is generally an unhealthy idea, for adults or children. Giving candies as rewards while telling children “this is bad for you” is especially confusing. Research shows that children who receive candy rewards tend to overeat, which leads to over weight and increases the chance of getting type 2 diabetes, high blood pressure, heart disease, stroke, cancer, respiratory problem and even Alzheimer’s disease. Another research proves that to young brain, the effect of sugar is surprisingly similar to the effect of nicotine, heroin, cocaine and other drugs. It is addictive.

Luckily, I am not alone. American Academy of Pediatrics and Centers for Disease Control and Prevention has been warning about candies. A federal regulation requested all the school districts to update their wellness policy regarding this. At our school district, the wellness policy actually states “Non-food items are recommended as incentives and rewards. Candy and soda are not permitted.” Thank the policy, ever since my son entered kindergarten, we never need to worry about candy rewards problem.

To my surprise, the problem happened despite the clear text that against food rewards.

I reached out to the teacher and explained that why we don’t want candy rewards. I further offered her stickers and small stationary items as rewards to replace candies.

I thought it was easy fix. But I was wrong. The teacher was furious. In a painfully long e-mail, she complained about not being appreciated, insisted on giving out candy rewards, but “your child won’t get any.”

My husband and I were very disappointed. Teachers have every rights to turn down an offer from a parent, but not the right to ignore school district’s policy. I was happy that she would stop “candy bribe” my child, but on the other hand, I felt that she didn’t see cay rewards as a problem and is getting revenge on parents holding different opinion by picking on child.

I talked to other parents and found the same thing happened to other children before. We then decided to bring the problem to the principal.

At I writing this article, the teacher is no longer my son’s teacher. I’m relieved. But more than that, I wish a healthy learning environment without unhealthy food rewards for all American children.