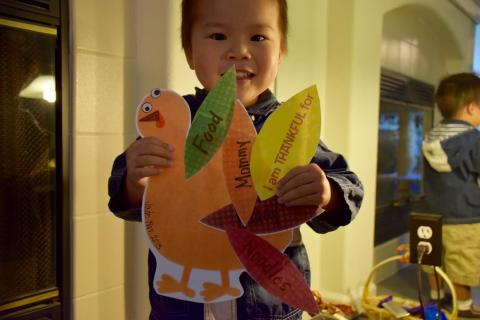 Thanksgiving is around the corner. Today my two-and-half-year-old came home from his day care with a thankful turkey. Thankful turkey, you know, the classic construction paper turkey lists what children are thankful for. We had this conversation.

“Things I xiexie for.”

“And what do you xiexie for?”

​So my little one is especially thankful for udon noodle soup. As for myself, I am especially thankful for my child’s day care teachers. (I’m thankful for udon noodle soup, too! It’s what served on our dinner table on those days I run late at work and don’t have time to cook.)  Last year around this time, our previous day care center went bankruptcy. I received the notice while on business trip. It was really a disaster. I rushed back home, and we experienced a chaos before finding this new center and my child actually falls in love with it.

We are in an era of curating children rather than simply raising them, and child care is recognized as one of the society’s most treasured and fussed over resources. That’s why it upset me when I recently learned that while many people can’t afford childcare, childcare givers aren’t paid enough to make rent.

A recent research found that, in the majority of U.S. states, child care costs more than rent. Because such a sizable portion of parents’ paychecks goes toward care, people would expect it’s an lucrative industry. Yet the reality is, most of the child care workers aren’t even making a comfortable living.

In a new analysis, economists at the Economic Policy Institute (EPI) finds that child care workers are among the lowest-paid workers in the country. On average, child care professionals made $10.31 an hour in 2014, which is 39% less than the average workers in the U.S., who earns an average $17 an hour. Moreover, most of child care workers don’t receive job-based benefits. In 2014, just 15% of them had health insurance and only 9% of them had pensions.

It takes more than a third of pre-school workers’ earnings to cover infant care costs in D.C. and 32 states. Considering the U.S. Department of Health and Human Services’ official affordability threshold for child care cost, which is 10% or less of a family’s income, most of the child care givers cannot afford child care themselves. It is ironic and not fair.

It’s clear that workers in the industry are not overpaid. Who, then, to blame for the inaccessibility of child care?

According to the Foundation for Economic Education (FEE), it’s the government. Over-regulation and lack of government support leads to a shortage of supply. Starting a child care business is so complex and involves so much hoop-jumping that entrepreneurs and small business owners are deterred from doing so, according to FEE. It also explains the bankruptcy of our previous day care center.

Caring for kids is so important that this kind of problem should not be overlooked. As a 2014 white book from the Berkeley Center pointed out, early childhood education should be a public good. Just like public education, not every has to use it, but it should be there.

For now, let’s be thankful for our early childhood education workers and hope for the Strong Start  for America’s Children Act will bring us some hope.

“So do you xiexie your teachers?” I asked my little one.