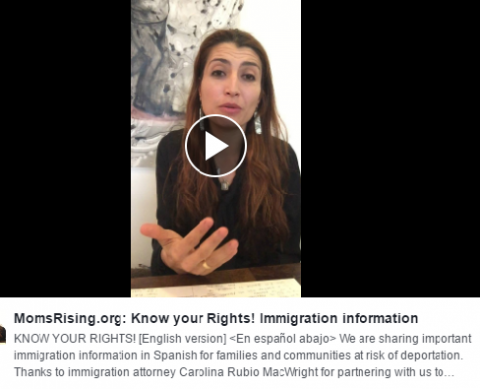 Top #5Actions To Take This Week!

You’re making a big difference!  Last week, after more than 30,000 of you sent messages opposing Trump’s completely unqualified nominee for the U.S. Secretary of Labor, Andy Puzder, along with a wide spectrum of engagement activities from a growing movement…. Drum roll please… that nominee dropped out!  You did it!  Plus, you’re building significant momentum to protect healthcare and Congress has gone from talking about outright repealing the ACA to “repairing” it.

We’ve got to keep up the momentum!  So here are our Top #5Actions for this week:

1-Help protect our democracy! Call 1-855-440-1800 and tell your member of Congress to defend the media and the judiciary branch from Donald Trump's efforts to delegitimize them. Tell your U.S. Senator it's time to put country before party: Stand up to Trump and stand for our nation now!

Background: President Trump wrote on Twitter that the nation’s news media “is the enemy of the American people.” He also tweeted that he disagreed with the judicial ruling that overturned his immigration ban, insulting the judge who had been appointed by Republican President Bush and confirmed by the US Senate as a “so-called judge.”  By attacking our major institutions – e.g. calling a judge a “so-called judge” and writing “the media is the enemy of the people,” Trump is undermining our democracy and the institutions that protect us all. This isn’t a partisan matter. Now is the time to put country before party.

2 – Spread The Word About The Rights Of Immigrant Families – Take a quick moment to share a “Know Your Rights” video on Facebook about the rights of immigrant families. This is a critically important time to spread this information around to your friends, family, neighbors, and community in light of the un-American and highly destructive Executive Orders that Trump has been pushing forward.

3. Urge Congress: Protect Medicaid!  As the fight for the Affordable Care Act (ACA) continues, unbelievably a new healthcare storm is brewing: Medicaid and the healthcare of more than 70 million Americans—including providing assistance for over half the births in the U.S. — is now at risk.  In fact, just last week, Congressional Republican leadership released a proposal that would gut Medicaid as we know it.

Background: Some members of the U.S. Congress, as well as Donald Trump’s newly confirmed Secretary of Health and Human Services, Tom Price, are proposing to make major cuts and changes (including damaging block grants) to Medicaid, one of our nation’s most treasured and successful healthcare programs. Not on our watch!  We’ve beaten back these types of proposed cuts to Medicaid before and we need YOUR help to do it again!

4. Tell Congress To Move A Comprehensive Paid Family/Medical Leave Bill Forward That Benefits ALL Working Families.  The United States is the only industrialized nation in the world without some form of paid family leave. This hurts families, our businesses, our global competitiveness, and our economy.  Sign on to a letter to Congress letting them know that our country needs a comprehensive paid family/medical leave bill that benefits ALL working families.

5. Attend a Town Hall Meeting & Help Protect Healthcare! — MomsRising supporters across the country are attending Town Hall meetings to protect healthcare and your voice is needed too! Sign on here to say that you’re interested in attending a local Town Hall meeting in your area. Then we’ll give you everything you need, including a book of stories from other MomsRising members about how healthcare has helped their families, community, and local economy.

Background: It’s time to use our “outside voices” to help protect healthcare! Members of Congress will be at home during the month of February, and many are hosting Town Halls to hear from constituents like you. Your voice is needed, and is powerful, and we hope you can go to a local event with your member of Congress. (Don’t worry, we’ll give you everything you need to attend, including a small booklet of healthcare stories for you to hand to your member of Congress.) Now is a critical time: Healthcare is on the chopping block right now: In fact repealing the Affordable Care Act (ACA) and making massive cuts to Medicaid, CHIP, and Medicare are at the top of President Trump’s and some members of Congress’ agenda right now, so it’s incredibly important for you to make your voice heard. (There are heroes in Congress too. Some have been protecting healthcare and they need to hear from us as well so they know we’re behind them as they fight for all of us).

***And that’s the top 5 actions for this week. Thanks for being a part of the movement that is #StillMarching!

Now, you might be wondering: What is MomsRising, anyway? MomsRising is an organization of over a million people, including people in every state in our nation, that’s working to increase family economic security, decrease discrimination against women and moms, and to build a nation that works for everyone. We open avenues for busy people to make an impact and have an impressive track record of wins at the city, state, and federal levels. One thing we’ve learned over and over again throughout our past 10 years together is that together we truly are a powerful force!

→ YOU ARE INVITED! → For your last action of the week, we invite you to sign on with us and we’ll bring you regular, high impact ways to #KeepMarching in the coming weeks as well: http://action.momsrising.org/signup/stand_with_momsrising

Feel free to forward this blog to your family, friends and other members of your community so they can take action too — and to help us grow our movement.

Together, we will never stop fighting for a safer and more just country! #KeepMarching!