Mad but not giving up!

Hugely disappointed and then…angry.   That’s how I felt, as a woman, and as the mother of a daughter, when I heard the news yesterday that the U.S. 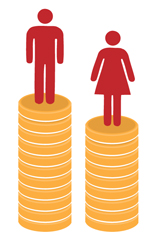 Supreme Court ruled against the courageous women of Wal-Mart – and women everywhere – in a 5-4 decision that these women won’t be able to join together as a class to challenge the pay and gender discrimination they faced as Wal-Mart employees. [1]  It’s important to remember that the Supreme Court ruling was sharply divided and *not* a judgment on the merits of the discrimination case against Wal-Mart, only whether or not the women can continue with the case as one class. [2]

But yesterday's ruling sets a dangerous precedent and could make it easier for employers — especially large ones — to discriminate against their employees and at the same time make it harder for workers to challenge discrimination.

Because, as explained in an editorial in the New York Times: “Without a class action, it will be very difficult for most of the women potentially affected to pursue individual claims. The average wages lost per year for a member of the rejected Wal-Mart class are around $1,100 — too little to give lawyers an incentive to represent such an individual. For the plaintiffs, for groups seeking back pay in class actions, and for class actions in general, it was a bad day in court.” [3] The women of Wal-Mart’s legal team is considering their options, but they could move forward with smaller class action lawsuits instead of the nation-wide class.

The fight for fair pay doesn't end with this ruling, however. Instead of staying angry, it's time to get better organized! This ruling plainly underscores the urgent need for strong fair pay laws like the Paycheck Fairness Act, which came within two votes of passing last year and is currently under consideration by Congress.  The Paycheck Fairness Act would strengthen penalties for equal pay violations, empower women to negotiate for fair pay, create stronger incentives for employers to follow the law and strengthen federal outreach, education and enforcement efforts.

It’s clear that it’s up to Congress to fight for fair pay for women. Ask your members of Congress to stand up for women and pass the Paycheck Fairness Act right away!  http://action.momsrising.org/sign/6_21_FairPay/

It’s important to note that the women of Wal-Mart will continue to fight for justice; even though they won’t be able to move forward as a class. It’s also important to note that several Justices agreed, in a dissent to the majority opinion, that the women of Wal-Mart did experience unjust pay discrimination and that “gender bias suffused Wal-Mart’s company culture.” [4]

Sadly, this problem extends far beyond the women who work at Wal-Mart: Studies show a long-term pattern of hiring and pay discrimination against women, particularly against mothers and women of color.  In fact, given equal resumes mothers are hired 100% less of the time than non-mothers; and mothers experience big wage hits. [5]  Pay and hiring discrimination is real, and is a huge problem impacting women in our nation.

Yesterday’s Supreme Court ruling is a huge blow but it makes our marching orders clear: We must prevent wage discrimination in the first place.  Had the Paycheck Fairness Act been in place 10 years ago, many women in the Wal-Mart case might not have suffered the same kind of unlawful pay discrimination that led them to file the class action law suit in the first place.

We need the Paycheck Fairness Act more than ever.  Data recently released by the U.S. Census found that women who worked full-time, year round on average still made 23 cents less for every dollar earned by their male counterparts. (This marks no change from 2008’s wage gap and amounts to nearly $11,000 per year in lost earnings).  And, the wage gap for women of color in 2009 was even more staggering than for women overall. When Black and Hispanic women work full-time, year round, they only make 62 and 53 cents, respectively, for every dollar their white, non-Hispanic male counterparts earn. [6] Further, a recent study found that with equal resumes and job experiences, mothers were offered $11,000 lower starting salaries (fathers, on the other hand, were offered $6,000 more in starting salaries than non-fathers). [7]

The Supreme Court’s ruling Monday is a huge disappointment to anyone who cares about women’s economic security.  But like the brave women of Wal-Mart we won’t let this set back deter us from our larger goals of ending discrimination against women and mothers.   Send a message to Congress today that you want to see the Paycheck Fairness Act passed. http://action.momsrising.org/sign/6_21_FairPay/
P.S. If you've experienced pay discrimination, you're not alone. Hundreds of MomsRising members wrote to us a few months ago sharing their own personal stories about pay discrimination.  Feel free to share any experiences you've had here too. Click here: http://www.momsrising.org/submit/mrstory/pay-discrimination

[6] US Census and NWLC Blog: State Wage Gap Shows Little or No Improvement since 2008