For my mother. For my daughters. 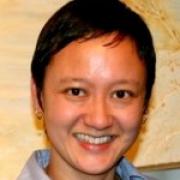 Miriam Yeung
Share This
Add your voice to the comments

Being a new parent is hard. The sleepless nights, the sudden loss of free time, the aching biceps from carrying around a surprisingly heavy baby, the spit up, the bottles, the picking up, the picking up, the picking up. But during my most miserable nights of waking up at 12am, then 2am, then 4am – I think about my mother. I think of her smirking in self-satisfaction now that I’m beginning to get my come-uppance for being such a difficult and rebellious teenager. No, I’m kidding. Sort of.

What I really think about is how much more difficult this would all be if I also had to move my life to a different country where I didn’t speak the language, where nothing was familiar and where I didn't have any family. That is, in fact, what my mom did with me when I was two years old. And for that I will always think she is one of the most courageous people I know.

But we know courage alone will not keep immigrant women safe or their families together.

I am going to Georgia for my mother, an immigrant woman who sacrificed too much so I could grow up in America, where despite being a girl and despite growing up poor, I could still go to the best schools and have more of a shot at opportunity. It is for her story as a mother, worker, caretaker, breadwinner – as someone who held our family together - that I go on September 28th and 29th to bear witness to the stories of other immigrant women, mothers, workers, caretakers, and breadwinners who are at this very moment having their families torn apart by unjust and inhuman immigration laws.

I am going to Georgia for my daughters because We Belong Together is also about strengthening the gender justice movement which they will inherit. The women’s delegation to Georgia brings together prominent women from different movements who don’t often get to work together – in civil rights, child welfare, immigrant rights, reproductive rights, LGBT rights, anti-violence - to work at intersections of our issues and to insert a much needed gender justice analysis into our immigrant rights efforts.

All women belong together in this fight for our human rights. Please join us on September 28th and 29th.  You’ll find us tweeting #webelongtogether and #womentogether throughout the delegation.

Miriam W. Yeung, MPA is the Executive Director of the National Asian Pacific American Women’s Forum, co-anchor of the We Belong Together Campaign and the sleep-deprived parent of Penelope, 3 years-old and Lexi, 6 month-old. Miriam was born in Hong Kong.