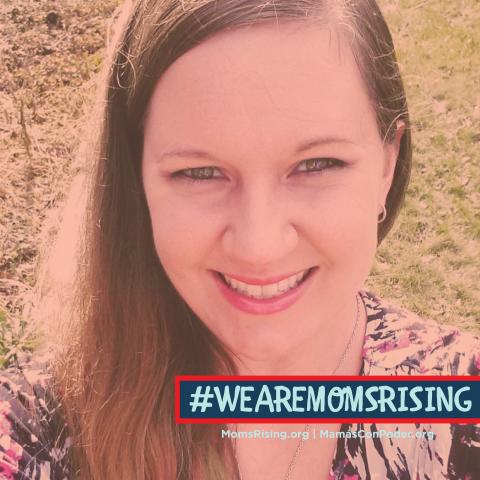 Families & The Federal Budget MomsRising Near You

We Are MomsRising, Nikki from Pennsylvania

In today’s installment of We Are MomsRising, we talked to Nikki in Pennsylvania about raising little activists. Read her story below. To learn more about the We Are MomsRising campaign, check out this blog post.

I started getting involved with activism around Proposition 8 in 2009. After the 2016 election, my activism increased. This was mostly because there was just more of it.

I was always involved in LGBT activism but 2016 had so many other things under attack. For me, there suddenly was more to be active about. Lots of people who never had anything to do with activism before are involved now and that is great. The more people who can do it the better because you can rally in more places and make a bigger impact. When I did Prop 8, we went to Philly. I am 2 ½ hours from Philly, so it is a day trip. Today, there is stuff on our public square in my small town. I can walk there.

People are coming together now, they are getting more active and I think people are realizing how rallies and activsim changes things.  And once you start getting involved on one issue, you get looped into all of them because you know about it and are more aware.

My favorite part about being a mom has been seeing how my kids are growing. To see them develop into little people and civic minded humans. They are so thoughtful and they are so thoughtful with each other and with things. They want to know what is going on. They are more cognisant of the world around them and I love seeing that.

We go to rallies and the kids have never missed an election.

I try to lay out things for them. I don’t like to tell them what to think. It is more like, “well here is what mommy thinks and here is what some other people think and what do you think?”

About a year in a half ago, there was this pro-immigration rally on public square in my town. And recently there was another rally for Families Belong Together and what is happening at the border.

For the immigration one, I told them “Grammy’s family and daddy’s family came from other places to live in our country and that is now where we live. So we think that it is okay for people to come here. And there are other people who think you shouldn’t live here and you should live wherever you were born and can’t move to make your life better or different.” So my kids then said, “Well I think people should be able to come here.” So we made some signs and went to the rally.

Same thing happened with the Families Belong Together event, my kids thought what was happening was terrible so we made some signs and went to the rally.

We did the March for Our Lives in Scranton. They had done active shooter drills at my son’s school. He’s in 2nd grade. My daughter was in pre-school at the time and she was aware of it too. They knew what happened in Parkland. So I told them I was going to this march and explained to them why and they were on board with that.

When we make signs, we throw out some ideas and my kids actually pick what they want to say on their sign. They make them and they hold them. It makes me proud to know I am raising civic minded humans.