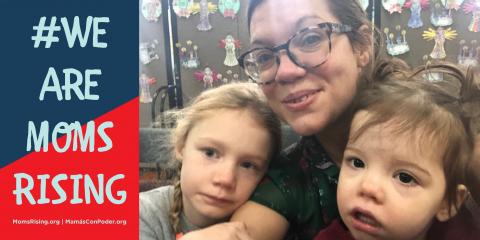 We Are MomsRising, Joan from Washington, D.C. [Govt. Shutdown Edition]

In today’s installment of We Are MomsRising, we talked to Joan in Washington, D.C. about how the government shutdown is impacting her and her family. Read her story below. To learn more about the We Are MomsRising campaign, check out this blog post.

I didn’t know it then, but December 21st would be my last day at work for some time. It’s now January 15th, and I have no idea when I’m going back.

I also don’t know when my next paycheck is coming.

It’s not that I don’t want to work; it’s that U.S. President Donald Trump has prohibited me from doing my job, on account of a border wall with Mexico.

Though both the U.S. Senate and House of Representatives had approved legislation that would fund the Federal government, Trump refused to sign the bill because it didn’t include $5 billion for a physical barrier between the United States and our neighbor to the south.

Effectively, the border wall is senseless and expensive, but Donald Trump is refusing to fund huge swaths of the U.S. Government until he gets it.

In ordinary times, I make my living as a contract worker with one of the agencies that has been shuttered in the partial U.S. Government shutdown. Some 800,000 Federal employees in states across the nation are now going without monetary compensation. Their families and children do not know when they will get paid.

At least, however, Federal employees have historically received back pay during government shutdowns. Contractors, on the other hand, have no such safety net. We are living our lives on hold, going without pay, and waiting for the call to return back to work. To serve food in the cafeterias. To secure the entrances to federal buildings. To vacuum and mop the floors. To run data analyses. To take care of countless tasks in the service to U.S. Government interests, but usually at a discounted rate of pay, and with fewer benefits.

The economic pain Trump is inflicting on us is real and widespread.

Meanwhile, there’s no shutdown for bill collection. As a working mother, my family’s bills are high: there are student loans, there are groceries, there are utilities, there’s housing, and there is childcare. At a cost of $1,170 a month, childcare is a major out-of-pocket expense for my family. Even then, I’m lucky; my five-year-old spends most of the day in her public kindergarten, which is free; her monthly childcare costs are only the $270 I pay for aftercare. And the $900 I spend on my two-year-old’s care is less than half what I paid for her when she was still one. For infants in Washington, D.C., full-day childcare costs an average of nearly $2,000 a month.

These costs are nearly prohibitively expensive in ordinary times. Without income, federal workers with children face a conundrum: Do we pull our children out of daycare, potentially giving up our child’s spot to the next kid on the waitlist? If we do take our children out of daycare, will we be able to make arrangements for them fast enough if the government were to reopen and we were called back to our duty stations with less than a day’s notice? And how do we pay for any of this, when we are not allowed to work?

I’ve been to the unemployment office twice now, and am awaiting my first allotment of benefits. Should I eventually receive them, they’ll total to less than a third of my salary on any given month. Not enough to pay my mortgage or childcare combined with the gas and water bills.