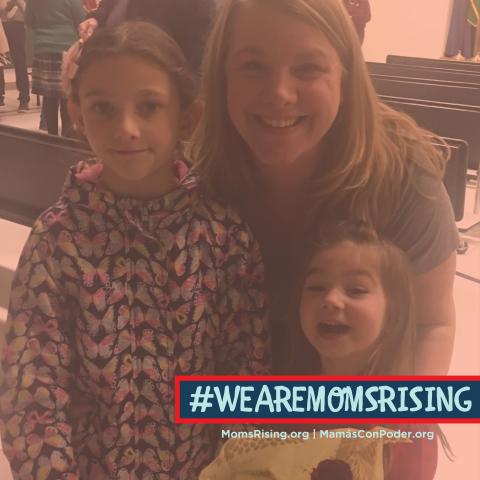 Childcare & Early Education Families & The Federal Budget MomsRising Near You

We Are MomsRising, Jamie from Washington

In today’s installment of We Are MomsRising, we talked to Jamie in Washington about how being able to access a childcare subsidy helped her and her two daughters. Read her story below. To learn more about the We Are MomsRising campaign, check out this blog post.

For me, my childcare story, started a little over two years ago. Before that, childcare was something I thought a little bit about but not much. My mom watched my oldest daughter while I worked part time 3 days a week. And when I worked, I worked at our family business located on the same property as my parents home where my oldest was, which made things easier.

I was hit with a huge tragedy in my life in 2014. I had a stillborn at 20 weeks, my son Gabriel, and from then on my life was turned upside down on so many levels. And since then I have been rebuilding. For the first time in my life, I had to go on food assistance. As I worked through the pain of my loss, working was difficult. I had so much grief and I became pregnant again after my loss 8 weeks later. I worried daily if this child would make it.

As I gave birth to my youngest in 2015, I was happy she was in great health but again another huge change came in my life. I split from my husband and moved out with my 2 month old and 4 year old. Two little ones and no job. I had to sign up for TANF. I was not able to work due to my 2 month old having an issue with her stomach that did not allow her to have anything besides breast milk. She would vomit for 10 hours at a time when we tried anything else. She would also wake up six to eight times a night.

This led to lots of specialist appointments and test at Swedish Hospital. She was so sick that I could not work. Doctors diagnosed her with some kind of allergy but they figured she would grow out of it. As she approached her first birthday, it got a little better. And then when she was a year old, she was healthy enough to be in childcare. This is where my childcare story starts.

I qualified for worker connections because I was on TANF. I cannot tell you how relieved I was to have childcare and was so thankful to have financial assistance for that childcare. I had a $15 co-pay. I know this seems like nothing to most, but at that point in my life it was a huge amount! And I was so thankful. I could go to work and have my kids cared for and make a future for us. Having worker connections was a really great help for me and kept me positive about getting job. I was also able to remain on food assistance for a time after I started employment.

As soon as I was approved for childcare assistance, I started looking at centers. I will never forget the first place I went because I came out and sat in my car and cried. My happiness to work was quickly changed to worry. Worry for my children’s wellbeing while at childcare. I searched and searched for daycares and was told over and over again when I called places that they were full. And I found out that most places did not take subsidy from DSHS so that limited my pool of childcare providers even more. Eventually, I did find a very nice center that took great care of my kids and loved them dearly! And I was able to work and feel like they were loved and cared for while I was at work. The assistance I received made it possible for me to work. If not I would not be able to work and would have to live in poverty for many, many years.

This assistance changes peoples lives! This helps so many families, especially single families.

These are vital and important programs. If it was not for help in childcare, food assistance, or TANF, I don’t know where I would be today. I don’t think I would be on a positive career path. I wouldn’t be able to run my own business and be a positive contributing member to society. Cutting funding for these programs is non-negotiable!