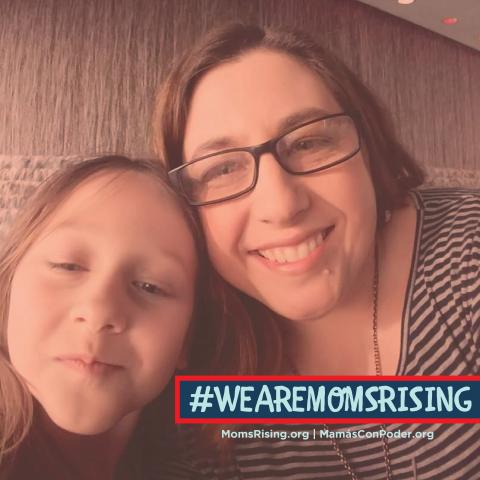 We Are MomsRising, Heather from Alabama

In our first installment of We Are MomsRising, we talked to Heather in Alabama who benefited from SNAP (food stamps). Read her story below. To learn more about the We Are MomsRising campaign, check out this blog post.

“In 2010, I suddenly found myself in an unexpected divorce. I was working towards my masters degree, but at the time I was also working part-time at a library for about $1,000 a month. As you can imagine, suddenly finding yourself single with two kids while making that kind of money was difficult. My ex-husband did not feel any financial obligation to the children so he did not pay child support. So I was left with no choice: I had two kids to feed. My mom told me, ‘Heather, you need to go sign up for food stamps.’

I was devastated because I had kind of looked at the stereotypes of people who went on these programs as lazy or people who just couldn't get it together. And then here I found myself having to do this. I remember crying in my caseworker’s office saying, ‘but you know I'm not like these people.’ She asked me what I meant. I told her I had my education and I worked. She looked at me and she said ‘Honey, the majority of these people are just like you. They do work. But they found themselves in situations they didn't expect to be in.’  She told me there was a lot of negative stereotypes about people who are receiving these benefits and most of those stereotypes are not true. So I signed up and I qualified and I received benefits for about nine months.

I did get another job that was higher paying so that I was able to make enough money to not be on the benefits.

What I tell people time and time again with all of the stress of the divorce and everything going on, the one thing I didn’t need to worry about was if my children were being fed. It was a huge weight off my shoulder knowing that no matter what my kids were going to eat.

I mean it is a misconception that it is just for people who don't want to work. I heard those comments being made behind me in the Wal-Mart line. It would be on a Friday afternoon when I had literally just finished a 40 plus hour workweek and you know I hear these people.  I would loudly talk to the cashier about how my day was just because I wanted these people to know ‘hey you know I'm working just like you are.’ The people behind me in line didn't know that my power was being paid for by my parents and I think people just want to jump to conclusions because it's very easy to look at someone and think you are better than they are. And that you’ll never be in their shoes. But what they don't realize is that they are just one illness or one like step away from needing these programs.

From that point forward, I was a huge advocate for these programs. Before this, I was guilty of believing stereotypes until I started receiving the benefits and began really researching them. It was there for me at a point where I really needed it. And so I'm going to be an advocate for SNAP so it can be there for other people."