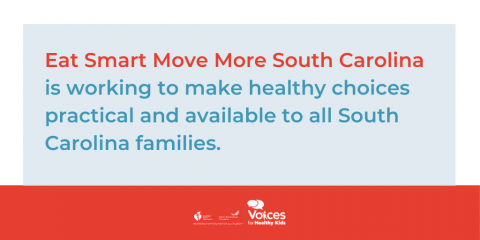 Voices for Healthy Kids has funded Eat Smart, Move More South Carolina (ESMMSC) since 2014. Recently, the coalition, working with the South Carolina affiliate of the American Heart Association (AHA) and others, successfully pursued healthy vending policies in several cities around the state, including the passage of one of the country’s strongest vending and food service policies in Columbia, South Carolina.

In 2018, ESMMSC received a Voices for Healthy Kids grant to support the Healthy Bucks healthier foods incentive program. The coalition and its partners applied for and received a Voices for Healthy Kids policy campaign grant that focused on changing restrictive language in the Healthy Bucks annual budget proviso. But the focus shifted during the grant period, away from a budget language change toward advocating for legislation that would make Healthy Bucks a permanent statewide program.

When lawmakers drafted the Healthy Bucks budget language in 2013, it allowed the one-time allocation of funds to be spent only on the incentives themselves. ESMMSC wanted to expand the language to also allow for spending on “technology and infrastructure,” which would make the program easier and more efficient for both farmers’ markets and SNAP participants to use. Modifying the language would also make it possible to market the program much more widely across the state. These goals are critically important to the success of Healthy Bucks because, currently, while more than 330 farmers’ markets across the state accept SNAP EBT cards for purchases, fewer than 10% of those markets also participate in the Healthy Bucks incentives program.

In January 2019, however, a state lawmaker suddenly took the focus off the restrictive budget language by filing a bill (H.B. 3250) to make Healthy Bucks a permanent state program. ESMMSC and its partner organizations quickly pivoted, deciding to instead focus their advocacy efforts on supporting the legislation. According to Phil Ford, ESMMSC’s Manager of Policy, advocacy, and community support and coordinator of the Healthy Bucks policy campaign, there was an immediate recognition that the language change goal should be rolled into the effort to pass the legislation and “achieve the ultimate win—a permanent and properly working SNAP incentives program.” This was a significant development because ESMMSC and its partners had considered such legislation premature due to the state’s political environment in 2018. Specifically, about 25 General Assembly members were new to their offices and were still learning about various programs, including SNAP. Thus, ESMMSC had decided to seek the language change, and wait on legislation, as a step in the right direction.

With the introduction of the Healthy Bucks legislation, ESMMSC quickly lined up its partner organizations in support of the bill and began a full-scale advocacy campaign. “Being flexible is extremely important in this work,” said Ford.

At the first Agriculture subcommittee hearing on the bill, ESMMC brought 19 advocates to testify in support of the bill—people representing food cooperatives, farmers’ markets, the state hospital association and religious groups, as well as a SNAP participant and a SNAP program coordinator. At the same hearing, however, it became clear that passage of the legislation would take longer than hoped because a proposal was made to move administration of the Healthy Bucks program from the Department of Social Services to the Department of Agriculture. Following the hearing, advocacy efforts shifted yet again, this time to support the proposal to move Healthy Bucks to the Department of Agriculture.

In the coming months, ESMMSC will prepare “to hit the ground running” in January 2020, when the proposed Healthy Bucks legislation, with an added amendment to change the budget proviso language, will still be on the legislative agenda. According to Ford, these efforts include a statewide tour to provide in-person legislative updates to ESMMSC’s partner organizations and coalitions across South Carolina; a robust storytelling campaign, which will involve the creation of a video that tells the story about the importance of SNAP and Healthy Bucks; and a survey of elected officials in the General Assembly to help ESMMSC better understand lawmakers’ priorities related to public health and target its messaging more effectively around those priorities.