Ruth is Senior Vice President & Chief Workplace Justice Officer at MomsRising. In this role, Ruth leads MomsRising’s campaigns on workplace issues such as paid family and medical leave, equal pay, earned sick time, minimum wage, pregnant worker accommodations, the future of work and more. Ruth also leads state-capacity building programs at MomsRising. Before joining MomsRising, Ruth worked at Planned Parenthood Federation of America, where she led a campaign to increase the public affairs capacity of affiliates, as well as at the Women’s Campaign Fund where she established and led new initiatives including  “Appoint Her,” a campaign encouraging women to seek appointed office. Ruth started her career in non-profit advocacy at People For the American Way where she focused on state policy and grassroots advocacy with an emphasis on election reform issues. Ruth serves on the board of directors for the Maryland Legislative Agenda for Women and is a former appointee of the Montgomery County Maryland Human Rights Commission, which works to eliminate discrimination, prejudice, intolerance, and bigotry in housing, recreation, education, health, employment, and public accommodation. She is a Girl Scout Leader and a recreational triathlon enthusiast. She lives with her husband, two daughters, dog and cat in Silver Spring, Maryland, but was born and raised in rural WV and believes that pepperoni rolls are the world’s best food.

What's the best advice you ever got from your mom?

“Don't skimp on bras and shoes. In other words, strong foundations are important. :)” 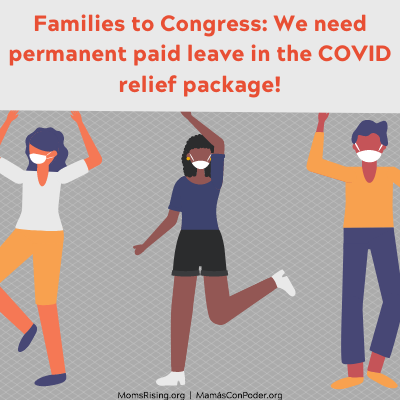 February 3, 2021
I'll get right to the point: Paid leave saves lives, during the pandemic and always. Congress let it expire in December. We must include it in the next COVID-19 relief package. → Join us to tell Congress this isn't negotiable, and they need to act quickly to pass permanent paid leave immediately. Emergency paid leave was one of the first things Congress passed in a bipartisan vote last March in recognition of how important paid leave is to beating this public health crisis; however that law was very limited in who it covered AND it expired at the end of December, leaving millions of families...
MomsRising Together
Quick Signature! 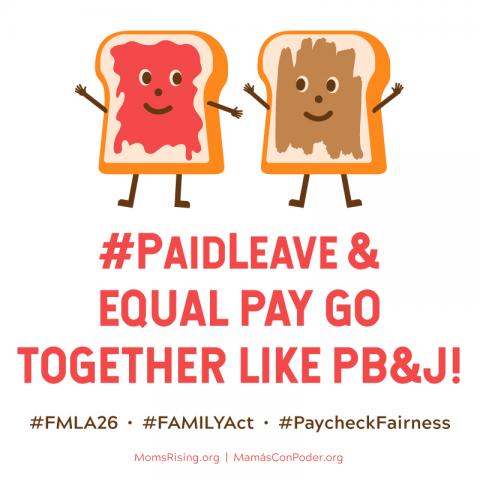 February 7, 2019
Like peanut butter and jelly, equal pay and paid family/medical leave aren’t fancy concepts, they’re not luxury items - they’re basics that stand alone, but are better together. That’s the message we’re taking to Congress and I need your help! → Add your name to our letter urging every member of Congress to co-sponsor and support the FAMILY Act - the paid family and medical leave insurance act that will soon be reintroduced in Congress. Here’s the scoop: Last week the Paycheck Fairness Act was introduced with a record number of co-sponsors in the US House. This is important because the more...
MomsRising Together
VOTE! 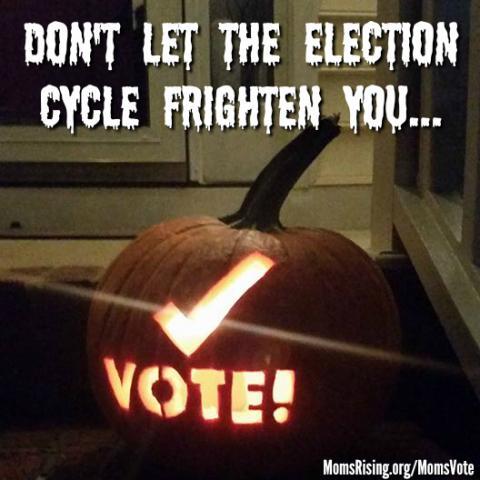 October 19, 2018
Does this election season have you stressed out? I’ve got a solution for you! Let’s Gourd Out The Vote and carve some electoral pumpkins! What the what? What is “Gourd Out the Vote” and what is an electoral pumpkin? A weird band? A polling firm? Nope! Gourd out the vote is a seasonal play on “get out the vote” and electoral pumpkins are my go-to election season stress reliever. Let me explain. A few years ago during a particularly stressful campaign, I found myself doodling and sketching out campaign signs while looking across a table at a pumpkin and thought – I’m gonna put this campaign...
MomsRising Together
Quick Signature! 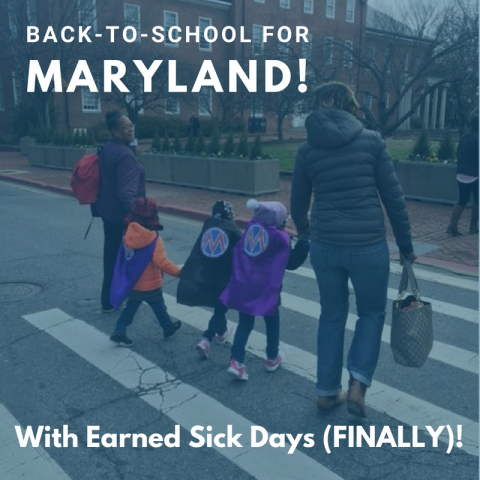 August 31, 2018
The pencils are purchased and lunch boxes are ready to be packed! It’s back-to-school time in Maryland! This year, kids and families across Maryland are returning to school with something extra exciting: EARNED SICK DAYS!!! That’s right, this is the first back-to-school season since we passed the Maryland Healthy Working Families Act! But we can’t rest easy yet! We know there is already backroom chatter about weakening this important law and we need to make sure our lawmakers in Annapolis know we are watching and we expect them to ensure this law is fully implemented and enforced. Add your...
MomsRising Together
Take Action! 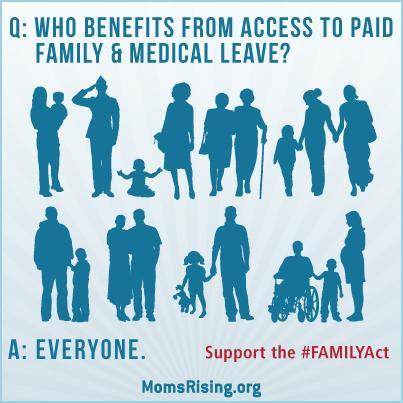 Say NO to fake solutions: We need paid leave now!

July 11, 2018
I’m going to get right to the point. U.S. Senators Marco Rubio, Mike Lee, and Joni Ernst are working on a proposal to raid Social Security to give income to parents of a new child. This is like robbing Peter to pay Paul. It quite simply doesn’t work. While we appreciate that the need for paid leave has become a bipartisan issue since the last election, the truth is that the Rubio proposal is dangerously flawed for two big reasons: It asks new parents to jeopardize their future retirement security for parental leave today AND t he proposal neglects the majority of people who take leave,...
MomsRising Together
Take Action 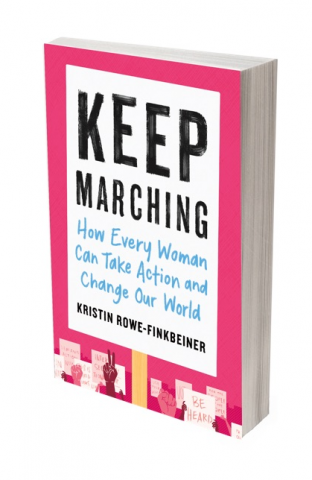 May 30, 2018
It's time to get real: We live in a country that often claims to worship mothers, but in truth, becoming a mother puts women at a tremendous lifelong economic risk. In fact, being a mom is now a greater predictor of wage and hiring discrimination than being a woman. → Let’s disrupt the wage gap, stand up and fight unequal pay, by talking more about how lack of equal pay hurts us all. We’ll get you started with a free copy of the equal pay chapter from the hit new book #KeepMarching. Here’s the deal. There’s no committee of people deciding to pay women, moms, and moms of color, less money than...
MomsRising Together
Take Action!
Family Economic Security Realistic & Fair Wages

It's Past Time for Equal Pay. Take Action!

April 11, 2018
It’s Equal Pay Day. Again . The day that marks how far a woman typically has to work into 2018 to make what men were paid the previous year, across race, ethnicity, and industry. This is quite simply NOT okay . So, this Equal Pay Day, we want to aim our Care Bear Stare (or really, our emoji glare) directly at the Trump Administration for putting a hold on equality measures. Why? Because, instead of helping our nation move forward to close the gender wage gap, the Trump administration put an indefinite hold on an important Equal Opportunity Employment Commission (EEOC) pay data collection...
MomsRising Together
Take Action! 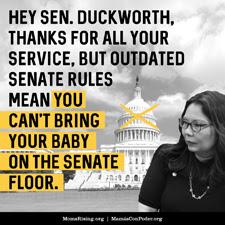 Research is clear: Support for a national paid family and medical leave policy is strong.

March 12, 2018
Nothing should keep you from caring for a loved one battling cancer, being with a parent nearing their final days, or bonding with a new baby. But that is exactly the case for far too many U.S. workers because our leave laws are out of date and haven’t evolved to meet the needs of working families or our global economy. The good news is that there is growing momentum in support of paid family and medical leave insurance. Recently, MomsRising teamed up with Lake Research Partners to conduct six in-person dyads and seven in-person focus groups across the country in November and December of 2017...
MomsRising Together
Family Economic Security Paid Family Leave

Could FMLA get better? You bet Jurassican! #FMLA25

A Momentous Day for Maryland

January 12, 2018
This afternoon, the Maryland State Senate followed the House of Delegates’ lead by voting to override Governor Hogan’s veto of HB1. After years of waiting and advocating for this bill, earned sick days will finally be a reality for workers in our state. This is a huge victory for Maryland’s working families and a momentous day for Maryland. More than 700,000 Maryland workers have suffered without paid sick days for too long, forced to make the awful choice between taking time off work to recuperate – or to stay home with a sick child – and earning a paycheck. Thanks to the Healthy Working...
MomsRising Together
Paid Sick Days

January 11, 2018
The Maryland House of Delegates voted today to overturn Governor Larry Hogan’s ill-conceived, outrageous veto of HB1, bringing the state one step closer to enacting earned sick leave law that will benefit families, workers, and the state’s economy. The Healthy Working Families Act, which both houses of the state legislature passed last year, will bring financial stability and peace of mind to hundreds of thousands of Maryland families. Right now, more than 700,000 working people across the state do not have earned sick leave they can use to care for themselves or their children when they get...
MomsRising Together 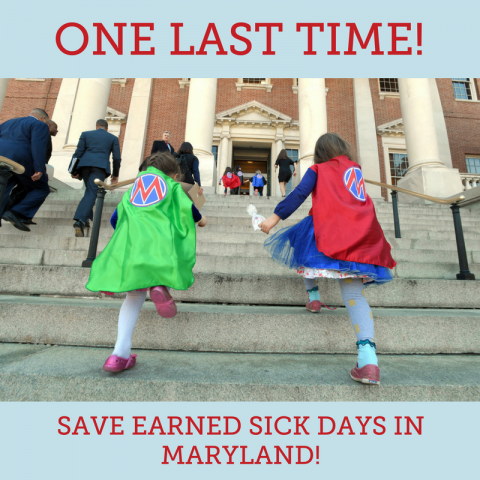 December 13, 2017
In a few short weeks, we have one last chance to win earned paid sick days in Maryland. We need to get ready right now because we’re not going to give up our shot!
MomsRising Together
Paid Sick Days 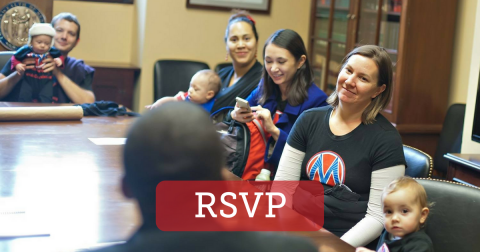 October 4, 2017
Between lack of earned sick days and non-existent paid family and medical leave policies, working parents are really feeling squeezed right now. But together, we can change this!
MomsRising Together
Take action! 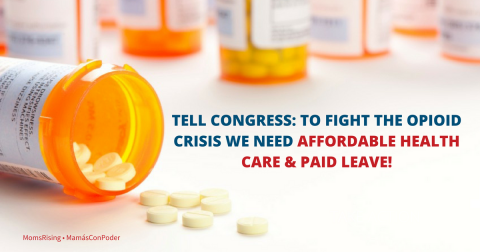 July 14, 2017
I’m from wild and wonderful West Virginia. It’s a state known for its rugged, natural beauty. Unfortunately, it’s also known for being one of the states hardest hit by the opioid crisis . I know that solving the opioid crisis is not an easy fix. I also know that right now there are two things currently being talked about on Capitol Hill that would go a long ways toward helping families dealing with opioid and other addictions (either personally or in their families). Those two things are access to affordable health care—including Medicaid—and access to paid family and medical leave. Families...
MomsRising Together 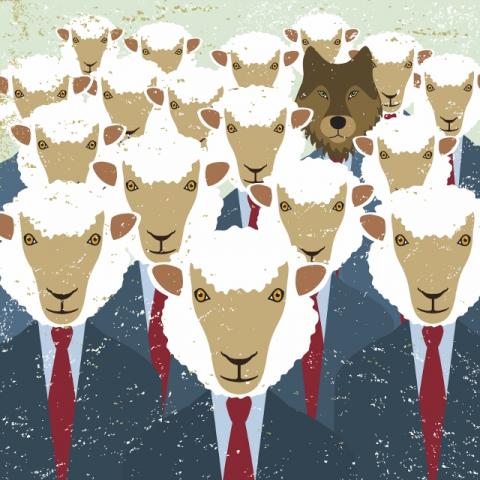 We See That Wolf In Sheep's Clothing!

April 27, 2017
You’ve heard about fake news. How about fake names for bad legislation? Yup, that’s happening too… but together we can stop it. The deceptively named, wolf in sheep's clothing, “Working Families Flexibility Act” (H.R. 1180 / S. 801) was just voted out of committee in Congress. It is now headed for a full vote on the House floor very soon and it's on us to make our voices heard to help stop it before it gets any momentum. This is a big deal because if passed, this bill would mean a pay cut for working people and less – not more – workplace flexibility! We have to stop this wolf in sheep's...
MomsRising Together 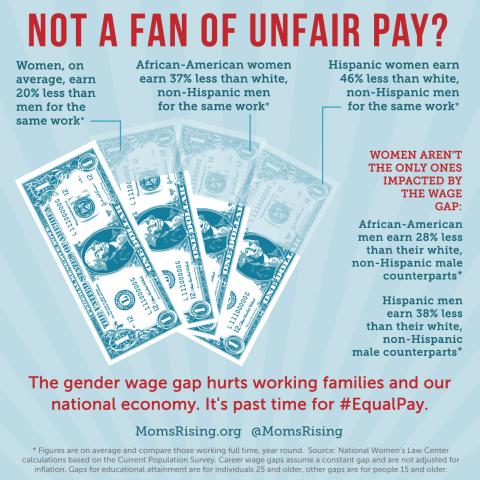 April 4, 2017
Today is Equal Pay Day. Again. Seriously, we are doing this again. It’s the day that marks the fact that, on average, it takes women 15 months to make what men make in 12 months. It's way past time for a change! Sign onto our open letter calling on state and federal lawmakers to end unfair pay by championing policies proven to help close the wage gap and boost our national economy: paycheck and workplace fairness, paid family and medical leave, affordable, high-quality early learning and childcare opportunities, earned sick days and raising the minimum wage. To be really clear, while today...
MomsRising Together

Music to our ears!

October 21, 2016
Earlier this week Spotify, the music streaming service, announced they’re endorsing Sen. Gillibrand’s FAMILY Act: a federal bill that would create an insurance program that would provide workers--including those who are self-employed and/or work part time--with much-needed income while they, or a family member, deal with the arrival of a new baby, or a serious health issue. The new, self-sustaining fund would be created through very small, shared costs between employees and employers. This news was music to our ears! The truth is that Spotify already had us dancing at our desks because around...
MomsRising Together 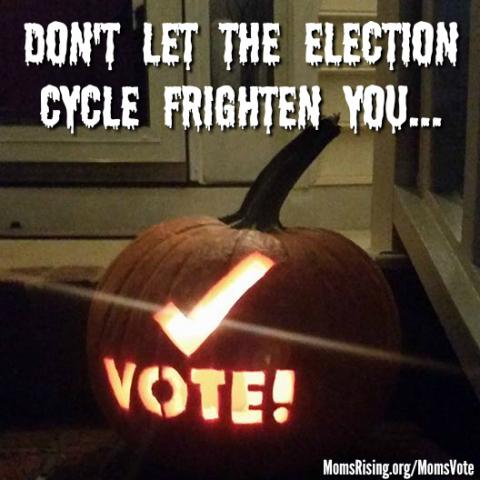 October 18, 2016
Does this election season have you stressed out? I’ve got a solution for you! Let’s Gourd Out The Vote and carve some electoral pumpkins! What the what? What is “Gourd Out the Vote” and what is an electoral pumpkin? A weird band? A polling firm? Nope! Gourd out the vote is a seasonal play on “get out the vote” and electoral pumpkins are my go-to election season stress reliever. MomsRising and bullhorn pumpkin.jpg Let me explain. A few years ago during a particularly stressful campaign, I found myself doodling and sketching out campaign signs while looking across a table at a pumpkin and...
MomsRising Together