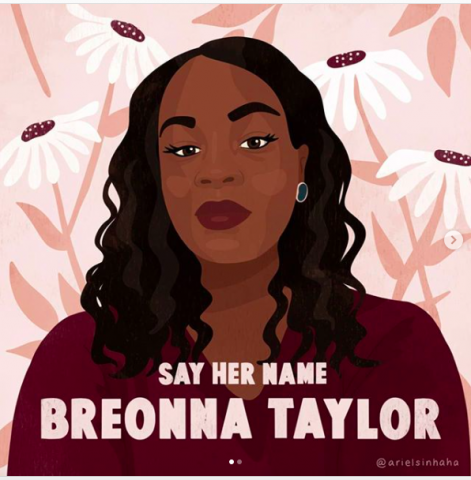 UPDATE: Last week, thanks to the actions taken by people across the country -- including MomsRising supporters like you-- Louisville’s Metro Council voted unanimously to pass Breonna's Law. The bill was rightfully named in honor of Breonna Taylor, an award-winning EMT, essential worker, and daughter who worked tirelessly to help others and who was killed in her home by Louisville police officers three months ago. Breonna’s Law effectively outlaws "no-knock" warrants and requires body cameras to be turned on before and after every search. This is an important step to ensuring tragic and unnecessary deaths like Breonna Taylor’s don't happen to anyone else.

There is still more work to do. Unfortunately the officers responsible for her death are still employed by the Louisville Police Department and have not been arrested or charged with her death.

On March 13th, Breonna Taylor was in her home in Louisville, Kentucky, when officers from the Louisville Metro Police Department (LMPD) broke through her door without even knocking, fired off more than 20 bullets, and shot Breonna eight times, killing her in her bed.

All three of the police officers involved, Sgt. Jonathan Mattingly, Brett Hankison, and Myles Cosgrove, are still employed by the LMPD and no charges have been filed. Instead the police department spent a month painting Breonna Taylor as a criminal, a suspect, which they later had to walk back when they admitted that she was innocent and had committed no crime.

The police were looking for drugs they never found, reportedly trafficked by a person who did not live with Breonna or even in her complex. The actual address was for a location ten miles away and for someone they already had in custody.

As an essential worker, Breonna went to work every day standing on the frontlines of the COVID-19 pandemic committed to helping people and being of service. The devastating irony of this is that Breonna survived the pandemic that disproportionately kills Black people, only to have her life stolen by police.

“It's hard to breathe without her.” - Tamika Palmer, Breonna’s mother.  #SayHerName and take action now.

Breonna loved to help people. She worked tirelessly as an award-winning EMT and first responder in Louisville. Her mother Tamika Palmer said, “You don’t like to call people perfect, but she really was perfect. She did everything right as far as trying to be a kid coming into an adult life. She loved to help people, she loved to be around family. She loved life and she was just figuring hers out. She was just getting started.”

Last Friday on what would have been her 27th birthday, Breonna’s mother took the day off as she does every year, except this year, instead of celebrating, she was mourning the death of her daughter by the Louisville Metro Police Department (LMPD).

Breonna should be alive. She should be here with us today, relishing in the celebration that was to be her 27th birthday. Instead, her life was tragically taken and her friends and family have yet to find justice.

“I want justice for her. I want them to say her name. There’s no reason Breonna should be dead at all.” - Tamika Palmer, Breonna’s mother.

The LMPD’s has had issues before that continue now after Breonna’s death. One law enforcement officer was caught on camera Friday night shooting rubber bullets at a reporter. On Saturday, police ransacked a “hazardous” supply of milk and water protesters had set aside. And Sunday, officers fired tear gas at peaceful protestors 40 minutes before the city’s curfew went into effect.

We cannot allow Mayor Fischer to be silent and inactive on this, and issues related to the LMPD. We must demand that Mayor Fischer fire the officers involved in Breonna Taylor's murder, and that they be charged with murder. The fact that these officers are still employed, and the family of Breonna Taylor has been given no answers, is immoral and an egregious miscarriage of justice.

Sign on to demand that Mayor Greg Fischer fire the officers who murdered Breonna Taylor and that they be charged with her murder!

Please share this post with friends, family members, and everyone who is outraged by Breonna’s murder and ask them to sign, too. We will deliver our demands supported by your signatures directly to Mayor Fischer and the Louisville Metropolitan Police Department.