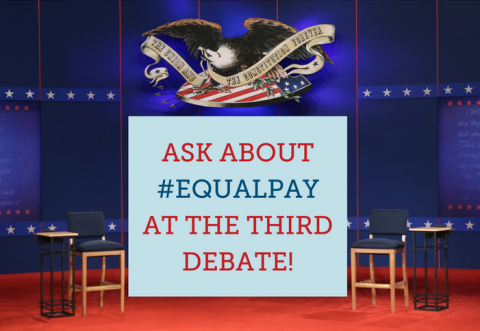 Tell the Debate Moderator to Ask About Equal Pay and the Economy!

Whoa. It’s hard to even know what to expect in the upcoming 3rd presidential debate next Wednesday.

There’s one thing we know for sure - some of the issues of greatest concern to women and our economy are not getting their due attention in these debates. Three hours and two debates later, none of the debate questions have been about closing the wage gap for millions of working women and mothers in this country.

Join us in asking debate moderator Chris Wallace to ask the presidential candidates where they stand on family economic security issues like equal pay!

Chris Wallace has announced that the national economy is one of the debate topics and women’s wages are a key factor in our national economy! The wages of women and mothers fuel our national economy but we’re working at a serious disadvantage thanks to the gender wage gap. In fact, motherhood is a greater predictor of wage inequality than gender. This lack of equal pay is a big deal to moms, women, and our economy.

Across the country, women are half of the workforce and earn more college degrees than men, but the typical woman working full-time, year-round only earns 80 cents to a man's $1.00. On average moms earn 73 cents on the dollar compared to dads, and women and mothers of color experience increased wage hits on top of that: Black women earn only .63 and Latinas only .54 for every $1.00 paid to white men.

In fact we haven’t even gotten to Latina Equal Pay Day yet this year! Latinas in the United States have to work ALL of 2015 and all the way until November 1 of 2016 to earn what white men earn in just 12 months alone! Outrageous! It doesn’t have to be this way.

To be clear, the wage gap isn’t women's fault, as some (not naming any names) have been saying. Even when controlling for job type, education, hours worked, and more; economists consistently find that the gap cannot be fully explained away by anything other than discrimination. And that gap occurs across occupations. In fact just Thursday, Law.com published a report showing that male law partners made 44 percent more than equally qualified women partners.

We know that gender wage gap costs women in the United States over $500 billion (billion with a "b") dollars a year and that ending discrimination against women and mothers in the workforce would cut the poverty rate for women in half and boost our national economy.

It is plainly very important to our national economy, to women, and to families to hear from the candidates about their plans to close the women and mothers' wage gaps.