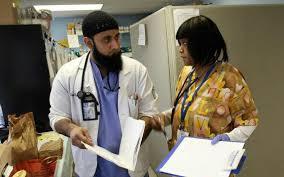 Khadija Gurnah
Share This
Add your voice to the comments
Faith and religious expression occupy a unique space in American culture. We have accepted, for the most part, that overt religious expressions are only part of what defines any one individual or community. We allow nuance such that Christmas caroling and bar mitzvahs and Holi festivals can be enjoyed by all. Muslim Americans have featured prominently in this American dialogue, yet it is often within a very narrow bandwidth that only allows for discussion of religious law (on which most Muslims are not scholars) or head coverings (which a large portion of Muslim women do not wear). The day-to-day lives of American Muslims and the ways in which we contribute to society, both in the extraordinary and the mundane, are often overlooked. In this blog I hope to bring more color to the discussion surrounding the American Muslim community and add to the vibrancy of our American dialogue.
The Institute for Social Policy and Understanding (ISPU) conducts objective, solution-seeking research that aims to empower American Muslims to develop their community and fully contribute to democracy and pluralism in the United States. A key part of this goal is achieved by their examination of how Muslim centered spaces function, which acts as a proxy for examining how Muslims live. ISPU recently released Reimagining Muslim Spaces (RMS), a series of reports examining how Muslims use their spaces to practice their faith. The reports are creating a space in the national dialogue for American Muslim communities as they are rather than as they are often portrayed.
The Quran 5:32 says that “If anyone saved a life, it would be as if he saved the life of all mankind.” It implies that our actions and our duties have impact far beyond the individual level, but that starting with the individual is the surest way to change the condition of a community. ISPU’s first RMS case study explores the HUDA Clinic in Detroit, MI, which exemplifies the spirit of this ayah.
Established in 2004, the HUDA Clinic is one of the many organizations that make Detroit a hub of social justice activism in the American Muslim community. From advocating for clean water for Flint to building dialogue on how to address intra-community racism, Detroit does it all.
With an operating budget of just $200,000, the HUDA Clinic has been providing free and low-cost primary care, dental, ophthalmological, podiatry and mental health services to those who are uninsured or underinsured. At the core of their mission is wellness - they seek to provide medical services not just to treat symptoms but also to address core problems with their patients to create healthier communities. When the Clinic’s uninsured population declined under the Affordable Care Act implemented by the Obama administration, they continued to see insured patients whose coverage didn't extend to all their healthcare needs. Their willingness to adapt to the needs of their community is a large part of what has made them so vital and so successful.
When President Obama introduced the Affordable Care Act (ACA) in March of 2010, I worked to raise awareness of its provisions in the Muslim community as I understood how critical health insurance coverage is to accessing healthcare. Before the ACA was introduced, over 40 million Americans lacked health insurance. Uninsured households are not only more likely up go without care but also more likely to be in debt and encounter bankruptcy. In fact, a Harvard study found that in 2007, 62% of household bankruptcies were due to medical debt.
The ACA successfully reduced the number of uninsured Americans by:
providing subsidies for households with incomes between 100% and 400% of the federal poverty level and
expanding the Medicaid program to cover all adults with income below 138% of the federal poverty level.
However, the law was never fully implemented as states such as Texas successful sued the Obama administration to block Medicaid expansion programs. This left millions unable to access insurance without the Medicaid expansion; it left millions more underinsured - forced to purchase low-cost insurance that didn't fully meet their needs.
The HUDA Clinic has been able to provide coverage to those caught in this gap, a gap that will mostly widen as the Trump administration has promised to continue working on repealing the ACA. While a recent Congressional effort to repeal the ACA was not successful, the administration does control payment of subsidies that lower the costs of health insurance premiums to low income households. Without the subsidies, millions of people will not be able to afford their insurance payments.
What is clear from the ongoing debate about the ACA is that the Muslim community has an important role to play in addressing the healthcare needs of our nation, and in order to do so, it is critical that Muslims continue to build upon their platform of social justice advocacy to engage in health policy advocacy, in addition to continuing the direct service delivery work as exemplified by the HUDA Clinic.