Yesterday was the 50th anniversary of the Equal Pay Act, but we are still fighting for equal pay for equal work for all. Right now the wage gap is kind of like the faces on US money… only white men earn full dollars. Everyone else is left with pocket change. 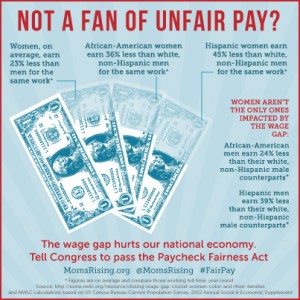 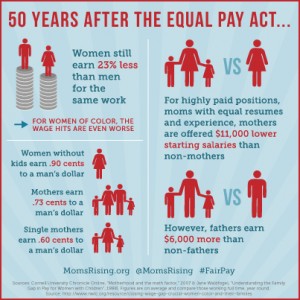 These numbers show how the wage gap effects individuals, and it also makes it easy to see how some families get hit with a wage gap on all sides, leading to an inter-generational disadvantage. A Latino mother and father with two grown daughters, for example, facing the average wage gap, could expect a family wage hit of $1.74 of the potential $4, reducing their earning to $2.26. One family member receiving wage discrimination hurts the entire family and when multiple family members receive wage discrimination this harm is amplified. 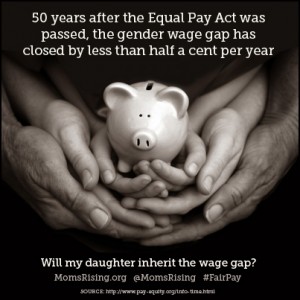 In the 50 years since the Equal Pay Act was signed into law, the wage gap has barely budged. If we allow wage discrimination to vanish at it’s current pace, we’d be sitting tight for 45 years. [1] My 8 year old will be 53. We can’t afford to wait. The law needs an update. That is why last week I traveled to Washington to join other MomsRising.org members in pushing Congress to support the Paycheck Fairness Act. 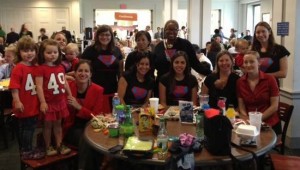 Paycheck fairness is vital for families. Queer families, like mine, can suffer multiple wage hits. I am a Latina woman and my partner is Asian American. Women like us can expect wage hits for our sex, race, maternal status AND sexuality. We also can't get the same benefits as straight couples. (For example, my partner cannot cover me or our child on her health insurance.) On top of wage discrimination and limited access to workplace benefits we face greater job insecurity and can even be fired in our home state for being gay.

The average household income for same-sex couples is 20% less than the average for heterosexual couples.[2] Two mom families have a median income that is $9,000 less than families with two dads.[3] And transgender individuals are 4 times more likely to be living in poverty than cisgender folks.[4] For LGBTQ people, hiring and firing discrimination compounds the disadvantage of the wage gap. 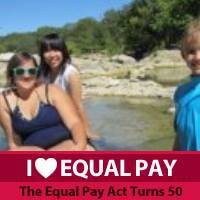 We need laws like the Employment Non-Discrimination Act and the Paycheck Fairness Act to protect our families. When families experience economic security, everyone wins. Will you help us in this fight? You can donate to our Fair Pay work here. Together we are a powerful force for ALL families.