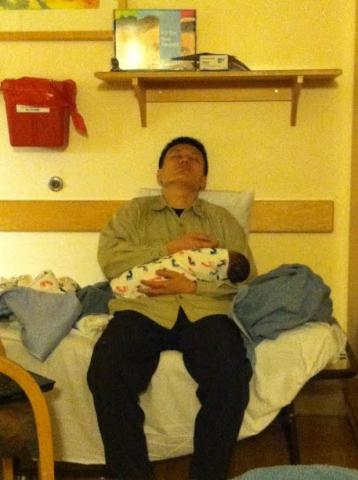 To-wen Tseng
Share This
Add your voice to the comments
Chinese University of Hong Kong recently implemented a policy allowing mothers breastfeeding breaks. The policy was criticized by an anonymous Internet user, claiming it’s “unjust to men.”
The post went viral and became the subject of a backlash from other Internet users.  Some said, “We’re sure the university would gladly apply the same break policy to any man who actually get pregnant, deliver the baby, and breastfeed.”
Forget about the amusing (and silly) debate, a recently published Australian study said that man actually can—and should—help with breastfeeding.
How many people does it take to breastfeed a baby? Dr. Jennifer Ayton, who lead the study, found the answer is closer to three people (mom, baby, and dad) than the traditional two of mother and baby. The chance of baby being breastfed for six months was significantly lower if dad preferred bottle feeding, or even if dad felt neutral about breastfeeding.
To estimate the prevalence of cessation of exclusive breastfeeding at each month up to 6 months and document key factors and commutative risk associated with exclude breastfeeding cessation for children aged from 0 to 6 months, Dr. Ayton’s team secondary analyzed using a national representative sample of 22,202 mother and infant pairs derived from the 2010 Australian Institute of Health and Welfare cross-sectional survey, the Australian Infant Feeding Survey.
The team found that among breastfed infants, 49% had ceased exclusive breastfeeding before they had reached 2 month of age. In the final Cox proportional hazards model, cessation of exclusive breastfeeding was most strongly associated with fathers preferring bottle feeding or have no preference.
Not every mom can or wants to breastfeed exclusively for six months. For those who do, however, it would be great if more dads striped up and helped. Among other things, fathers can offer rest, food, water, and encouragement.
When mothers nurse the new babies, fathers can help by being enthusiastic, supportive, and knowledgeable.
When it comes to baby food, the science is clear—there’s nothing better than breast milk for the baby. Breastfed babies get fewer infections, and mothers who breastfeed have lower risk of osteoporosis and type-2 diabetes.
Fathers obviously can’t actually breastfeed the babies. But their attitude and support can be crucial as mothers learn how to breastfeed. By learning about how breastfeeding works fathers can also be more “part of the team” and support mothers through any early difficulties.
Telling mom that she’s doing a great job, organizing dinner and taking the opportunity for precious dad-and-baby time (e.g., take opportunities to carry the baby in a sling, or to just cuddle him; cuddling skin to skin can help settle the baby) so mom can grab a bit of sleep are all important.
Dr. Chris Ellliot, pediatrician in UNSW Australia, write from his personal experience and encourage dads to take a more active role in parenting their children.
When his wife went back to work after a 9-month-long maternity leave, Dr. Elliot chose to take 12 months leave and became a stay-at-home dad. He wrote, “It was tougher than I thought it would be.”
As an pediatrician, Dr. Elliot was no stranger to children, but, according to himself, “parenting and households were largely unexplored territory to me” and the experience of staying at home “taught me innumerable lessons about parenting.”
Being an engaged dad doesn’t always go smoothly, but it’s great fun. Dads can--and should--help with breastfeeding. So do fathers actually helping with breastfeeding deserve the breaks like mothers do? It’s another question. And this is exactly why we need paid paternity leave.