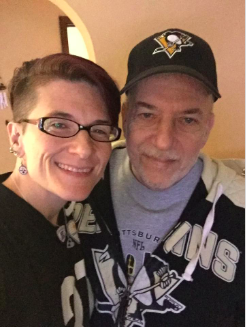 Not Silent, Not Ashamed 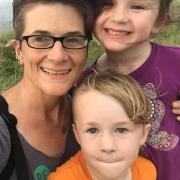 Jessica Hulick
Share This
Add your voice to the comments

I was raised by my mother, grandmother, and three uncles. My dad was not in my life until I was a teenager because he was an alcoholic. But as soon as he was sober, I saw him every Sunday, talked to him all the time, and immediately knew that he loved me and had my back, unconditionally. I was his only child but my mother had another daughter, ten years younger than me, who my dad treated just like his own. My sister called him Daddy Bill when she started to talk.

I moved to North Carolina for college and I was sitting in a bar in Greensboro, watching the Steelers game, of course. An older guy started talking to me about being from Pittsburgh. I mentioned that my dad was a softball player and this total stranger said “You are Billy Barie’s daughter!” He knew and loved my dad. It didn’t hurt that I look just like him! Everyone loved him. He was such a good person. The oldest of seven children, he was constantly giving to others, whatever they needed, even when he had nothing for himself. He was a very hard-working, blue collar guy. He fiercely loved his family. After I finished college, I knew that I was making more money than he was but he continued to send me “a little help,” every month, even when I told him I was fine.

My dad was healthy his entire life. He was a life-long athlete. He always played baseball and softball, every season, although he complained about being forced into the senior league! But very suddenly, several years ago, his health dramatically declined. He was in constant pain and often, he could barely walk. He couldn’t even put on shoes. He wanted to continue to work but his job required being on his feet all day. So, he lost his job and applied for disability, which he absolutely did not want to do. It took more than two years to be approved. During those years, he lived with his brothers and sisters. I constantly tried to get him to move to North Carolina but he was a Pittsburgh guy and was never going to leave.

He had so many different surgeries that I lost track, including several additional surgeries to correct mistakes made in other surgeries. I never felt that he was receiving quality healthcare but he was too proud to let me help him navigate the system, which I was doing professionally. He was bounced around to doctor after doctor. His healthcare was determined by what disability would cover, not necessarily what would be best.

Because he was in constant pain, he had an array of medication and fell into a deep depression. In all of that pain, after 27 years of sobriety, he never started drinking again, which I thought was absolutely heroic. However, he was taking too many pain pills. I think, in his mind, even when he acknowledged taking too many, the pain pills were not related to his addiction because he was in real, physical pain. I could hear it in his voice, even from hundreds of miles away. But none of us could convince him to get treatment and we certainly all tried.

In May, he died by suicide; an overdose of the pain pills. He was only 63 years old.

It took three months for the Medical Examiner to officially rule that his death was suicide and even though I had a feeling, deep in my heart, it was a huge shock. He adored his grandchildren, his brothers and sisters, and all of his nieces and nephews. He would joke that he had too many to remember them all but he always did. He loved his Pittsburgh sports. He would text me through an entire Steelers game, in ALL CAPS, of course! But my dad would never allow himself to be a burden on anyone, although we never thought he was a burden. He was exhausted, physically and emotionally, from the pain.

Some in my family have asked me to not talk about this and I understand the shame and fear. But I have always been outspoken and my dad loved that about me. I never once doubted that he was immensely proud of me and my life as a community organizer, even when we disagreed about politics! When I came out as queer in 1995, his immediate response was “So, you’ll find Princess Charming instead of a Prince. Who cares.” So, he had to know that I would speak out about his suicide.

Our culture encourages silence about mental illness. But I will not be silent and I am not ashamed. I have also struggled with depression and anxiety for my entire life. I attempted suicide twice, in my twenties. I was extremely lucky to have health insurance for treatment and a great support network of friends and family. Now, my children are at greater risk because of my history, as well as my dad’s. So, it is absolutely necessary for me to speak honestly and directly about it. Christine Moutier, the American Foundation for Suicide Prevention’s chief medical officer: “Suicide is a health outcome. Think of it like heart disease. People have varying degrees of genetic risk that predispose them for heart disease. If you had five family members who’d died of heart attacks, you’d do everything you could to keep healthy.”

According to NAMI, the National Alliance on Mental Illness, research has found that 46% of people who die by suicide had a known mental health condition. Several other things may put a person at risk of suicide, including:

I have no idea how to end this story because I know it is a lifelong battle, in dealing with the grief and to continue to address mental health. I loved my dad so much and I am heartbroken that he was in pain. But he taught me to stand strong in the face of adversity. So, I will continue to talk openly about the risks of suicide, as well as the healthcare system that failed him and continues to fail too many others.

National Suicide Prevention Lifeline: 1-800-273-TALK
The Lifeline provides 24/7, free and confidential support for people in distress, prevention and crisis resources for you or your loved ones, and best practices for professionals.