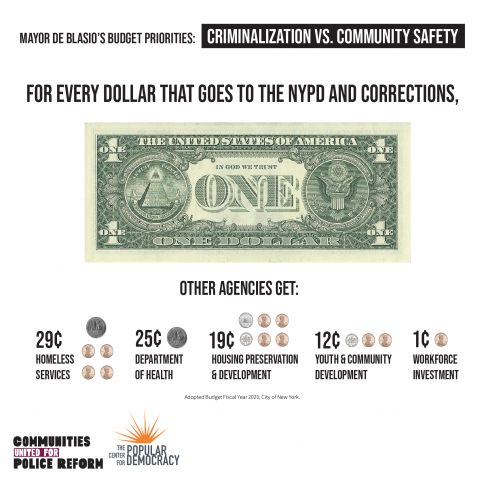 We did it. In the past two weeks, we have collectively won on a package of bills, all a part of the #SaferNYAct, that will change the way New Yorkers are treated by police in their communities. 50-a, a state statute that carved out special and unnecessary exemptions for police, firefighters, and correctional officers; shielded abusive officers and failed police disciplinary processes from public view; a bill that made New York State arguably the worst state in the nation in terms of hiding police misconduct and discipline, was repealed last week. This means more transparency and accountability for police misconduct and discipline in our state. We also won on the Police STAT Act, which requires the recording and reporting of demographic and geographic data on law enforcement activity to improve transparency of policing activities across the state. And finally, the Special Prosecutor bill, which will strengthen and codify the Office of the Special Prosecutor to investigate cases where police kill civilians.[1]

But we’re not done.

The 2019 NYPD budget was $5.9 billion. The NYPD’s share of the budget is more than health, homeless services, and workforce development combined. Let’s take a moment to imagine the influx of resources that would be readily available to New Yorkers if $1 billion of those funds were diverted back into community programs like Summer Youth Employment, summer food programs, public and affordable housing, quality public education, mental health programs, just environmental restrictions, affordable MTA and public transportation,  and-- because of the time we’re currently living in--essential COVID-19 recovery plans and medical care for all New Yorkers.

We can make it a reality by demanding that Mayor de Blasio defund the NYPD by AT LEAST $1 billion and reallocate those funds to invest in the health and safety of Black, LatinX, and other communities of color in New York.

COVID-19 exposed our infrastructures (or lack thereof) in the worst of ways. When our communities needed medical assistance, we were sent police officers. When we needed resources for food, we were sent police officers. When people could no longer afford to pay rent, they were policed instead. Our communities need easily accessible resources and services, not over-policing during a health pandemic. The “fundamental contradiction” as Communities United for Police Reform calls it, of NYPD’s almost $6 billion expense budget under the de Blasio administration is that, “monies have been invested in policing and criminalization instead of health, housing and other community needs. This helps explain why NYC has been so devastated by COVID-19, especially amongst elders, Black, Latinx and other communities of color.” We will no longer tolerate Mayor de Blasio and his administration prioritizing policing and mass criminalization over the needs of his constituents-- SIGN ON WITH US![2]

We implore Mayor de Blasio to invest in our communities through education, housing, healthcare, mental health services, and to address the needs of the people living in low-income communities including but not limited to: youth, elders, immigrants, healthcare workers and other essential workers, homeless New Yorkers, public housing residents, people with disabilities, LGBTQ+ and gender nonconforming people, women, informal economy workers (including street vendors, sex workers, canners and others), and the many New Yorkers who have or may become newly unemployed or homeless as a result of the COVID-19 pandemic period.[2]

When 800,000 of New York City’s children are currently living in poverty and receive help with free school lunch and employment opportunities, reinvesting funds into these programs shouldn’t even be up for debate. Our children are safer when schools are “well-staffed, well- supported, and have the equipment and other infrastructures they need.” Placing police officers in public schools and Black, Indigenous, and people of color (BIPOC) communities doesn’t make them any safer. Oftentimes, as we’ve seen in the cases of Eric Garner, Amadou Diallo, Sean Bell, and other victims of NYPD’s violent and terroristic practices, police officers abuse their authority in our communities and we are left to feel vulnerable, unsafe, and/or deceased.[2]

By defunding the NYPD by at least $1 billion and deepening investments into our communities, we will create a healthier living environment for our children and families. We need protection from COVID-19, not from police officers and the very systems that are supposed to protect all of us.

[2] The Path Forward: How to Defund the NYPD, Invest in Communities & Make New York Safer