Making Knowledge Out Of Sound: The Enduring Legacy Of The American Indian Flute 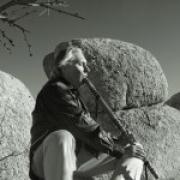 Gary Stroutsos
Share This
Add your voice to the comments

I want to share what has been shared with me over my career in a good way and try and touch the souls of young people that stories matter. As a cultural outreach & world flute artist I try and bring the universal language of music to the world.

The true essence for me of the sound and the enduring legacy of the traditional American Indian Courting Love Flute with its haunting, yet plaintive, sounds is the long vocal-like phrases and the unique delicate pulse that transcends the sound and takes you to another world.  That place is the land and the sounds of the natural world’s movements that I feel first inspired American Indian Flute players in days gone by.  Voices of deep traditions, which were not our own, came alive over the generations that go back beyond counting.  If the songs were played from the heart, the flute would take care of itself.

I first heard this sound inside a now long-gone company called “The Nature Company” in a mall in Seattle, Washington. The sound was from “Flash of the Mirror” by a traditional Lakota (Hunkpapa Band) and Anishinaabe flute artist, Kevin Locke.  Kevin was one of the first to go back to the elders and learn traditional songs, which he later played and recorded on his flutes.

The pure solo aspects of his sound drew me to North Dakota to meet him, and study with him the music and the culture of his people that produced his work.  When he first met me at Makoche Recording studios in downtown Bismarck, North Dakota, he asked me, “What are your motives and intentions with this music and the flute?”  I had to think on that for a minute, and I told him, “I want to learn the songs and play them in a good way.”

Today there seems to be very little interest in the traditional songs passed down by families over time still being sung, and few are played on Native American Flutes.  I understand how we are moving faster today and have so much information on hand, but it is important that these songs be preserved.

What we must better understand is that it takes time to shape the music and study the songs in order to begin to play them with some sense of respect and dignity the music deserves.  The time I spent early on building a foundation through these artists I have met, studying the songs, and recording the songs has been so valuable to me as an artist and someone who wants to carry the music forward.

The road has not always been easy, what with recording industry interference, false promises, hurt feeling among artists, issues of ownership of the music, and just the sad reality of this being a very small niche market of interest.  However, through it all, when one puts in the time, they can begin to have a sound they can call their own.  I entered this world in the best way possible:  Through the people who produced the music first, and I learned the right way (and am still learning today, for the musical journey is never done).

I would never have a had an opportunity to become the recording artist that I am today, or a cultural outreach artist, or someone who could write my thoughts down, if not for the time on the Northern Plains of Dakota and Makoche Records putting out my first recordings and introducing me to the American Indian artists from that label.

How did I approach this music, other than traveling to North Dakota and meeting some American Indian artists, you may ask?  Coming from an American Jazz music background, I understood the deep meaning of the Afro-American art form we call Jazz today.  I understood how melodies written for jazz soloists were to be improvised upon.  This is what Jazz artists do:  They improvise.  You practice scales and technique, but you cannot teach the art of being on the spot, soloing over the melodies written for you.  With regard to the “vocal aspects of traditional American Indian love songs,” I took the same approach I did with Jazz songs and learned the melodies, then rewrote the melodies in my solos.  One of the first examples of this style is on my recording, “Winds of Honor,” and is a Navajo chant I learned from Navajo flute maker Paul Thompson, entitled “Shi Ni Sha.”  I started the chant, played a solo, and then repeated the chant in order to give it form. This had not been done to my knowledge prior to 1996.

I have carried this method, for lack of better term, through to the present day when I play these songs I know.  I feel this gives the music a sense of foundation or a “base from which to be free.”  I have learned over the years how important these songs are to the people.  My travels and conversations with Elders have taught me that the songs came to the person through the spirit world, through dreams, and other forms. These songs were not composed like a Jazz composer would write a song.  This has given me a new outlook on the music and how to present it with more respect, if I am gifted with a song to learn that did come form the spirit world.

The space and timing of these songs takes a long time understand.  There are “hidden phrases” in this music.  Playing a traditional song that may sound so easy to hum or read from TAB is quite different when you play it on the flute.  How do you make it “sound like the land?”  We need to “make knowledge out of sound,” as Hunkpapa Lakota blind Medicine Man, Joe Flying Bye, told me many years ago on the banks of the Grand River at Sitting Bull Sundance camp one hot day.  “You have to play the songs right or you may get throat damage and die.”  I was not ready to believe him then.  I do today.

When I first started to learn the unique relationship the land had with the American Indian music, it brought to life many moods and inspirations that furthered my quest to play the music of the American Indian.  I remember standing on the banks of the Missouri River hearing the meadowlarks and the geese flying overhead, or inside the canyon walls of Canyon de Chelly listening to the winds whistling through the canyon.  I was thus beginning to better understand how I was using these spaces as a musical collaborator, or partner, to inspire me to learn songs, then to go into the studio and record them for all to enjoy.

I always try to bring the history of a sacred space into the music as a way of giving the music a certain depth and emotion, or, as I like to say, “music through history.”  Practice outside if you can, and go visit places that inspire you.  I will always return to these places and play the songs from my heart and soul forever.

You will be rewarded in your own way if you are willing to do the work that it takes.  This is all I did:  Work over many hours and many years, and connect your heart with the music and the land.