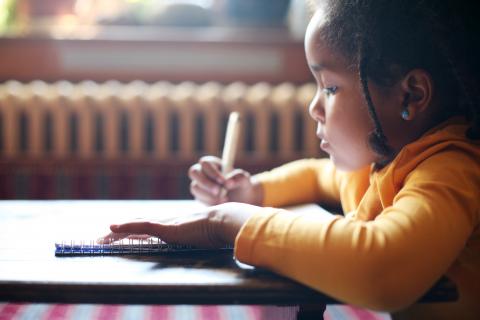 THREE MILLION students, including preschoolers and kindergartners, are suspended from public schools each year across the nation.  Last year in New York City, more than 800 kindergarten through second graders were suspended from school. Not only are these children only approximately 5 - 7 years-old, but they are disproportionately Black, Latino, or disabled.  Racial profiling and discrimination is traumatizing, breads toxic stress, stunts the social emotional development of children, and fuels the school-to-prison pipeline. For decades parents, teachers, and advocates have been pushing back. Now, New York City could lead the way with a step in the right direction.

On July 22nd,  NYC Mayor Bill De Blasio’s  Leadership Team on School Discipline and Climate released new school safety data and issued recommendations on school discipline and safety.  Amongst the recommendations were increased restorative justice training for educators, better coordination or resources for mental health services, and a ban on suspensions for Kindergarten to 2nd grade.  The recommendations also include an expansion to restorative justice practices, including the warning card pilot program.  The program allows Police Officers and School Safety Agents to issue warning cards for certain low level offenses in lieu of a criminal court summons. As part of the program, after a Warning Card is issued to a student, a school official contacts the student's parents or guardian and the incident is handled administratively by the school rather than in the the courts.  This program avoids the common entry point for many students into the school to prison pipeline.

“The Leadership Team has been the most comprehensive effort to address New York City’s School-to-Prison pipeline and it has produced recommendations and programs that if fully adopted, supported, and effectively implemented will have a positive impact on improving school climate for all students.” Read more of the statement here.

Suspensions have historically impacted children with disabilities and children of color disproportionately. Students with disabilities are four times more likely to be suspended than students without disabilities.  Black students also served longer suspensions on average and were more likely to be suspended for subjective misconduct like insubordination.  Urban Youth Collaborative lifted up in its statement that 673 students were handcuffed, with over a third of those incidents resulting in no charges or arrests.  This practice and profiling has got to stop, not only in kindergarten through 2nd grade, but through the school system as a whole.  In a petition lead by MomsRising examples of 1st graders students being handcuffed and students suspended for using nasal spray were lifted up to urge Mayor De Blasio to consider important reforms to school discipline policies and policing practices in NYC Public Schools.  Momsrising issued this statement in response to the announcement;  Read more here.

“We applaud New York City Mayor Bill De Blasio and the Mayor’s Leadership Team on School Discipline and Climate for their recommendations that recognize that suspending kids grades k-2 does little to advance school safety and rather promotes a dangerous school-to-prison pipeline. Much more is needed, but this move is an important step in reforming school discipline and promoting social emotional development for New York City’s youngest elementary schoolers."

These recommended changes are scheduled to go into effect during the upcoming school year, and while there is broad support for reducing suspensions and ending the school to prison pipeline the Teachers Union in a recent Wall Street Journal interview criticized the move to halt use of suspension as a disciplinary measure for students in kindergarten through second grade.

disciplinary policies that include suspensions, expelling or even arresting kids for minor offenses that use to be

mediated by principals and school staff.  We can and must do a better job of investing in practices and policies that

deconstruct the school to prison pipeline and build the cradle to college pipeline.  By investing in and expanding the use of restorative justice and trauma informed care in schools which includes non-punitive discipline models such as peer mediation, conflict resolution, truth and reconciliation committees, guidance counseling, mentoring, teacher training and support, and parental and community involvement initiatives, schools and school professionals are able to reduce conflict in schools, exclude use of police and police interventions and create positive and healthy school environments for the success of all students.

All students deserve a quality education free of criminalization because of the color of their skin, ability, gender, and socio economic status; measures like this move us closer to that possibility.  I think I hear a pipe cracking somewhere in New York, and I hope that sound becomes a battle cry for school districts across the country needing to make changes to school discipline and safety.