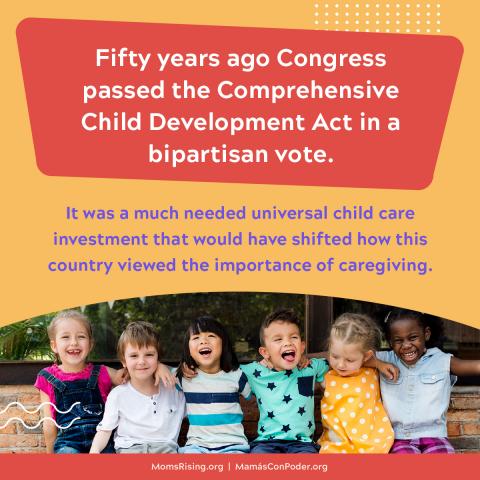 If it hadn’t been for former Republican President Richard Nixon, families like ours likely wouldn’t be struggling to afford and find child care. Full stop.

December 10th is the 50th anniversary of Nixon's veto on Universal Child Care, also known as the Comprehensive Child Development Act of 1971, that would have implemented a multibillion-dollar national child care system that passed both houses of Congress with bipartisan majorities.

So if it was Bipartisan, why the heck did President Nixon veto it? Racism and its history in our country played a huge role. The National Women’s Law Center Executive Director, Fatima Goss Graves, best explains it in a recent piece for The Hill:

“After the Civil War, many white families still relied upon the unpaid or underpaid service of Black domestic servants for their most valued treasures, a status quo many white families worked to further invisibilize through the proliferation of the "mammy" stereotype…Child care wasn’t business, the mammy suggested, just personal…This narrative is precisely what fueled the exclusion of domestic workers, including child care providers, from many of the labor protections enacted through the New Deal — even as child care providers proved all the more vital for women filling homefront jobs left empty by drafted male soldiers sent abroad…

The structure of the child care system the bill proposed would have put control of publicly-funded child care centers in local hands which, in much of the South, meant subverting white state governments in favor of local Black control. Hoping to keep their hold on segregation, conservative activists lobbied heavily against the bill, portraying it as a Communist plot to destroy the nuclear family. It was on these grounds Nixon vetoed the CCDA, ending the last major Congressional push for a fair and just universal child care system.”

And the consequences for families and child care providers following the Nixon veto have been astronomical.

Child care providers are some of the lowest compensated workers in our country. Families often can’t access care because in many states, it can cost more than college tuition. Or they live in a child care desert, with families with infants often getting hit the hardest. My own family, that is now two generations into this crisis, has also been feeling the effects. Our child care journey would have looked really different if universal child care had been in place.

That’s the bad news. The good news is that if the Senate passes the Build Back Better act (which - WOOT WOOT - already passed the House) with the child care and pre-k portions intact, we can make sure that our kids and our grandkids aren’t in the same struggle.

So watch this video to learn more about what child care pieces are in the bill and call your Senator by texting YESBBB to 747464 to tell them why these issues matter to you.

Want to know more about the Nixon veto? Here are some helpful articles to learn more: