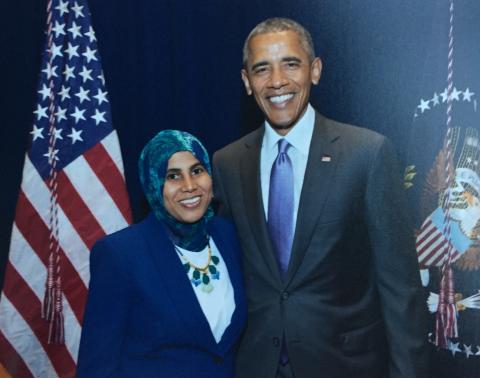 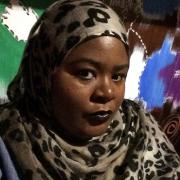 Today I was very honored to be one of the participants at a roundtable discussion today with President Obama when he visited a Baltimore-area mosque. It was a historic moment as it was the first time in his presidency to visit a mosque in the United States. It was also a personally significant moment to have the opportunity to meet and welcome the President to the mosque where I met my husband 14 years ago.

I have been working on public health outreach in the Muslim community, including working with MomsRising on an obesity prevention toolkit for the Muslim community. As anti-Muslim sentiment has increased across the country in recent months, I have been working on programming to support Muslim young adults who have been reporting higher levels of stress and anxiety. It is in that role that I was invited to participate in the President’s trip.

While I have heard and read opinions that have had reservations or expressed skepticism about the President's visit, I work with young Muslim Americans and I know it's significant that this visit comes at this time.

Millions of young American Muslims are watching -young women and men that reflect the diversity of the American population in ethnicity, socio economic status, education and political thought. Young women and men who may have been bullied into downplaying their religious identities for fear of social or physical repercussion. Those who have taken to the streets to raise their voices against injustices in their communities - police brutality, government surveillance, education reform, or the indignity of living in America and not having access to affordable health care or drinkable water. Those who simply go about the day-to-day task of living life in every way extraordinarily average.

There are as many stories to be told as there are people to tell them. The American Muslim community is part of the story of this country, and young American Muslims will continue to shape this narrative far into the future. I am thankful for President Obama’s show of solidarity and hope that other political and thought leaders will follow his lead in championing tolerance.

I am proud to be part of the MomsRising community as in this space I've been able to champion efforts that speak to the kind of world I want for all of our children and families. I've been able to be in a space that transcends the single narrative that is being generated of who Muslims are. In this community, I am Khadija and I care about addressing child poverty, paid family leave, healthy food for our children, affordable healthcare for our families, addressing the lead in our waterways and in paint in decaying houses that is poisoning our children. This space allows me to be myself.

At the meeting today with the President I spoke of creating spaces where young Muslims can transcend the single narratives they wake up to every day. To give them them the bandwidth to create art, to work on social justice issues, to live well with compassion and authenticity.

It is my hope that collectively we will find ways to move past this difficult time in our history. That we ensure support for each other to live with authenticity and compassion. If we are able to live with individual authenticity, with an eye towards tolerance that breeds justice, we add to the richness of this country. And we thrive.