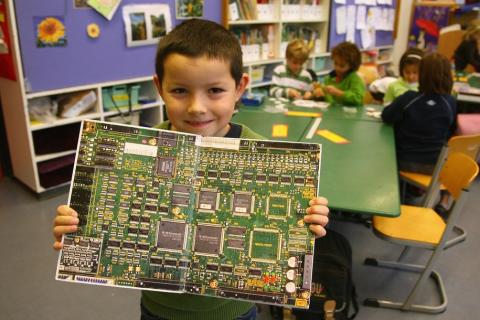 This picture was taken at the John F. Kennedy dual-language school in Berlin, Germany. According to a recent article in the Financial Times, Germany's economy has grown at its quickest rate in 5 years, at a time the country has embraced mass immigration.

Donald Trump’s openly anti-Hispanic rhetoric – for which he has never apologized --  has only fueled anti-Latino sentiment and racist acts in the country. Take for instance, the verbal abuse of Hispanics who speak Spanish in public.

In one recent incident, a white woman verbally assaulted a Hispanic man at a Sprint store in Virginia, threatening him with physical violence and telling him to “go back to Mexico.” The video, which was viewed by millions, ended with the woman ranting, “So disrespectful speaking another language in my country.”

Her outburst reveals an historic and deep-seated bias against non-English speakers and immigrants, and a lost opportunity for the United States – our country, not just hers – to remain relevant in an ever changing and competitive global economy.

Being bilingual isn’t an assault on American values, but a growing necessity for anyone who simply wants to work and function in the world.

I grew up in a Spanish-speaking household, and am eternally grateful to my proud Cuban father who insisted that we speak Spanish to him. Being bilingual has proven an asset on the job, allowing for me to be hired as a translator, reporter and digital organizer in bilingual communities. In fact, it’s one of the first things I mention in my resume. U.S. workplaces love bilingual people!

Because of my experiences, I always knew that I would raise my children to be bilingual. Once they were born, my husband and I switched to speaking Spanish in the home. We also helped found a Spanish immersion school in Oakland, California so that they would learn to read and write it as well. Not only do they have the foundation to someday find work in the United States, but overseas!

But what about the “national identity” of the United States? Trump supporters frequently ask. Won’t the country decline into chaos if everyone speaks a different language?

White Americans might fear the loss of some idyllic anglo saxon or white “identity,” but as a Latina who is every bit as American as any Trump supporter, I can only say that the U.S. Hispanic community very much embodies American values: love of country and family, a strong work ethic, and entrepreneurialism.

That we will sink into some abyss because of multiculturalism and multilingualism couldn’t be further from the truth. Among the many proven benefits of bilingualism are the following:

1. Students learning more than one language outperform English-only students…in English. It may seem counterintuitive, but studies show that bilingual instruction actually makes you more proficient in English. According to Stanford University: “The results show that while students in English immersion programs perform better in the short term, over the long term students in classrooms taught in two languages not only catch up to their English immersion counterparts, but they eventually surpass them, both academically and linguistically.”

3. Being Multilingual makes for more empathetic people. Particularly relevant in the era of Brexit and Trump, children from multilingual households are able to take in multiple perspectives and communicate in ways that take into consideration the points of view of others. The good news is a child doesn’t have to be fully bilingual to attain this benefit: researchers found that simply being exposed to other languages helped kids in “perspective-taking.”

4. Being bilingual can delay Alzheimer’s, dementia. Alzheimers.net has compiled two studies:  “More studies need to be done to know exactly why this happens, though some researchers suggest that switching between two languages requires a specific area of the brain that, when exercised, can delay dementia.”

5. Bilingual workers benefit and help fuel the U.S. economy. Between 2010 and 2015, demand for bilingual workers more than doubled from 240,000 job postings to 630,000. In fact, elected leaders from both major political parties and some of our country’s top businesses and non-profit organizations have come together to launch “a multi-year campaign aimed at reversing the nation’s language skills gap and making language learning a national priority. The campaign seeks to build awareness about the growing importance of language skills to a wide array of careers – and to our nation’s economy, national security and international standing – with the ultimate goal of supporting a new generation of Americans equipped to compete and succeed in the global economy.”

As a Hispanic mom in the era of Trump, I’ve found myself telling my kids that speaking Spanish or being Latino is not a crime in this country. We are every bit as American and deserving to be here as any Trump supporter. And in fact, we have a leg up over our xenophobic counterparts. We are bilingual, which is the future of this country…and the world.