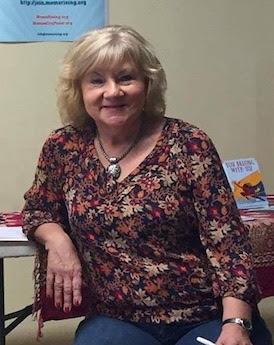 This Giving Tuesday, keep marching to protect women and families in America. Make a gift to MomsRising.

“I just can’t sit here and yell at the TV”

Today, we’re celebrating Giving Tuesday by honoring our dedicated KeepMarching leaders and volunteer advocates like you, many of whom have deepened their commitment to change through our KeepMarching program. And we’re inviting supporters like you to help MomsRising keep opening avenues for bold leaders across the nation — like Terry (see below) — to KeepMarching and have an impact. Make a Giving Tuesday contribution today and it will be matched $1-for-$1 by another generous MomsRising donor.

“I can’t just sit here and yell at the TV. And I really can’t afford a psychologist. So I started to talk to other women.”

That’s Terry Ciulla, a retired businesswoman from New Jersey. Terry doesn’t have kids, but she says you don’t have to be a young mom or have kids to believe in the mission of MomsRising. You just have to care about people.

She connected with MomsRising after the Women’s March this January, and signed up soon after to become a KeepMarching leader.

It was a rough start.

Her meetings with her member of Congress, Rep. Josh Gottheimer, didn’t get very far. Her first community meeting was a dud — only two people showed up!

But Terry doesn’t call herself “a pushy broad” for nothing. She wouldn’t give up.

With guidance from our KeepMarching team, Terry tried again. This time she connected with a friend who owned a yoga studio and held her meeting there. She walked to the nearby tennis courts to recruit people. Over 25 people came!

“I needed a team. [MomsRising’s] Gloria is my mentor. She showed me I do have the strength. She gave me the tools and ammunition I needed to persist and resist. I think MomsRising is the best thing since Wonder Bread! I wouldn’t be where I am today without them.”

This month Terry had her team over to her house to write letters to the editor. She handed out fliers for Affordable Care Act enrollment. She’s making her voice heard with her friends on Facebook and Twitter.

There are thousands of women like Terry, with a burning passion to make change.

You can ignite their power, and help us all rise to our fullest potential as advocates, with a Giving Tuesday gift to MomsRising today.

Every $1 you give between now and midnight tonight, Nov. 28, will turn into $2, doubling YOUR power to make positive change for women and families.

Terry says, “If we stick together, we’ll be heard.”

Are you ready to help women like Terry power up to help win for women and families?

Thank you for your commitment to moms and families in America.