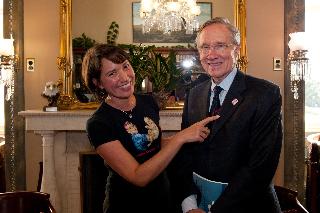 We're pinning our hopes on you because children need health reform too!

The over one million members of MomsRising have one top priority and that's our kids. We're willing to wear our support for health reform that works for America’s kids on our sleeves. And we're asking our legislators to wear it on their lapel. MomsRising is collecting photographs of members of Congress wearing the pacifier pin, as a symbol of their commitment to make sure health reform is a win for kids too.

MomsRising members sent over 15,000 letters and made hundreds of call to their members of Congress urging them to wear the pin! Check out the results below.

Why is there a picture of a pacifier on the lapel pin? Because the over one million members of MomsRising won’t be pacified until Congress delivers a health reform plan that meets kids’ needs. That means:

* Simplifying enrollment systems, so neither private nor public bureaucracies stand between an eligible child and the care he or she needs Our very own Donna Norton got to meet with Sen. Reid to talk to him about why healthcare reform is so important for kids and families.

Senate Majority Leader Harry Reid was the first to take a photo wearing the MomsRising pacifier lapel pin. Thank you for standing up for kids and families, Senator Reid! Speaker of the House Nancy Pelosi is wearing the MomsRising pacifier lapel pin. Thank you for your support and tremendous leadership, Speaker Pelosi! Senator Debbie Stabenow of Michigan is standing up for kids. Thanks, Senator Stabenow! Senator Barbara Mikulski of Maryland is showing her support. Thanks, Sen. Mikulski! Senator Maria Cantwell of Washington is standing up for healthcare reform that works for kids and families! Thanks, Sen. Cantwell! Senator Jeanne Shaheen of New Hampshire wants to make sure healthcare reform is a win for kids. Thanks, Sen. Shaheen! Representative Lois Capps of California met with me to talk about kids' health care. Thank you, Rep. Capps! Representative John Lewis of Georgia is standing up for kids and families! Thank you, Rep. Lewis! Senator Kirsten Gillibrand of New York wants to make sure healthcare reform is a win for kids. Thanks, Sen. Gillibrand! Senator Sheldon Whitehouse of Rhode Island is taking a stand for children. Thanks, Sen. Whitehouse! Senator Robert Casey of Pennsylvania is wearing the MomsRising pacifier lapel pin to show his support! Thanks, Sen. Casey! Senator Mark Begich of Alaska is standing up for kids and families! Thanks, Sen. Begich! Representative Betty McCollum of Minnesota is fighting for children's healthcare. Thanks, Rep. McCollum! Senator Roland Burris of Illinois supports MomsRising and healthcare that works for children! Thanks, Sen. Burris! Senator Robert Menendez of New Jersey showing his support for kids and families. Thanks, Sen. Menendez!

Legislators: Want to show your support for kids' healthcare? Just snap a picture of yourself wearing the pin and send it to felicia@momsrising.org and we will post it here for all your constituents and moms across the nation to see. (If you need a pacifier lapel pin, contact felicia@momsrising.org)