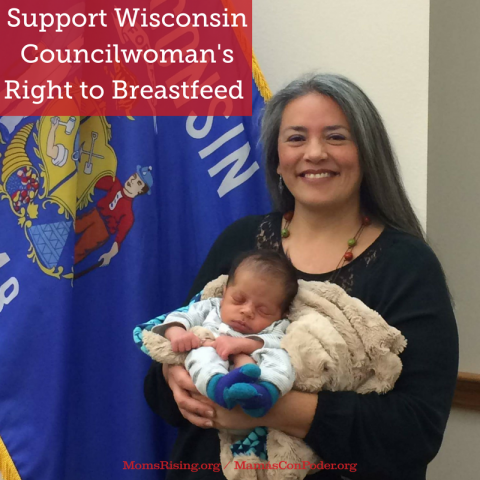 We Stand Up For Eau Claire City Councilmember's Right to Breastfeed

Today, starting at 2 PM, moms advocacy groups will join together to deliver letters and petitions to the Eau Claire City Council, demanding a table to the vote for an “exception” for Catherine Emmanuelle, a two-term Eau Claire City Council Member and mother of an 11-month old, who has been barred from her legally protected right to breastfeed in public because she was banned from the dais (an elevated platform in chambers where council members sit) during council meetings, and has been told that breastfeeding her child in public at the council dais violates the Council’s policies on decorum. Councilwoman Emmanuelle has been relegated to sit behind the city clerk’s desk hindering her ability to represent her community by fully participating in council business.

VoteRunLead, Emerge Wisconsin, and MomsRising have launched petitions to support Catherine and the rights of parents everywhere, which they will deliver today.

Kristin Rowe-Finkbeiner, Executive Director and CEO of MomsRising, a leading mothers advocacy group powered by over one million members, issued the following statement:

“This is 2017. Three out of four moms are the primary or co-breadwinner in their families these days, and we must close the gap and expand protections for all breastfeeding mothers, city councilmembers included.

“To be clear, Councilwoman Emmanuelle does not need an ‘exception’ to breastfeed in public; that is already her legal right. To put this matter to a vote is outright bizarre and further perpetuates the notion that mothers need to ask permission to breastfeed their children. They do not. This is already a legally protected right and is also what doctors recommend.

“The Eau Claire City Council should table the vote on an exception because an exception isn’t needed, and instead work toward finding solutions that make public service more accessible to all working parents, including reducing barriers for breastfeeding moms, and get back to the business of working for the residents of Eau Claire. It’s about time that governments and companies alike get their facts straight: accommodating working mothers is good for business.”

In the United States, four out of five mothers start out breastfeeding, but less than half are still breastfeeding at six months postpartum even though doctors recommend a full year. A lack of workplace accommodations is one barrier that prevents many mothers from meeting their breastfeeding goals. These barriers particularly affect women of color face and contribute to increasing health disparities.