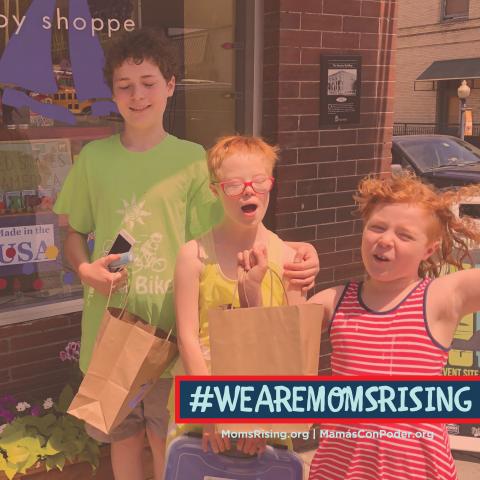 We Are MomsRising, Cyndi from Indiana

In our second installment of We Are MomsRising, we talked to Cyndi in Indiana who benefited from the Affordable Care Act. Read her story below. To learn more about the We Are MomsRising campaign, check out this blog post.

Without the [Affordable Care Act], my whole family would have lost our insurance because of my daughter’s significant chronic medical complexity. After she was born, we were spending weeks at the hospital. When she was tiny, the shots she would receive would be thousands of dollars a piece. She was just running up medical bills like crazy. Just the use of the surgery room by itself and the equipment in it when she was having heart surgery was a $64k bill. There was no way we would have been able to sustain her care without the passage of the ACA. We were coming up at the lifetime cap for our family plan and all five of us would have lost our insurance. The ACA was literally in affect just in the nick of time. Because of that, Anthem just couldn’t write us off and cease coverage. The lifetime cap was no longer legal under the ACA.

Without the ACA, I don’t know if we would have ever found coverage again.

Even with private insurance, we ended up with over $100k in medical debt. In Indiana, there was a waitlist to get on the Medicaid waiver, which waives household income for a child or adult with a disability or significant limitations to their functioning so that they can receive Medicaid. This makes it so a middle class family with a medically complex child doesn’t have to go into debt because Medicaid becomes a secondary payer. Unfortunately, at the time in Indiana, the waitlist was about 10 years when we enrolled her after she was born. She was about 9 ½ when we got our target letter and Medicaid became a secondary payer. We no longer had to worry about debt.

If you have anyone in your household who is medically complex, Medicaid become a lifeline. When you literally overnight go into this situation, it is unbelievable financial and emotional stress. The medical bills can be devastating.

I grew up on a piece of a farm that had been in my family for generations overlooking the Ohio River in Indiana. It was very much rural poverty. I don’t remember going to the doctor as a child. We were pretty healthy so it wasn’t really warranted. I remember my mom using ridiculously silly home remedies like eating onion sandwiches and lying by the front window under multiple blankets so that the illness could bake out of me. That’s what you do when you are poor and can’t afford to go to the actual doctor.

If my daughter had been born into that situation, she wouldn’t have lived. There is just no way. Access to healthcare, Medicaid, SNAP, and more is huge. I believe hard work and education are very reasonable keys to getting out of generational poverty. But I also believe the support provided by programs like SNAP and Medicaid are incredibly important safety nets.