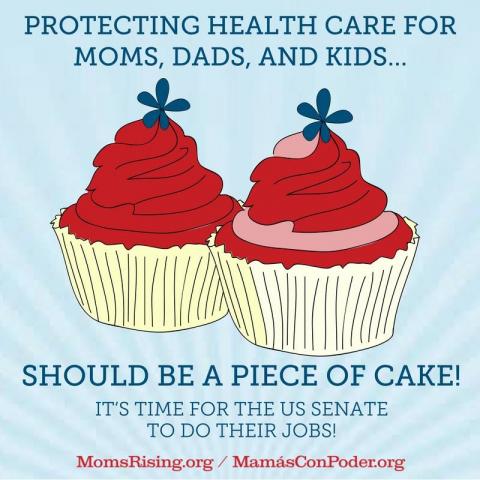 As a vote on the Graham-Cassidy Bill seemed more and more likely in September, MomsRising members across the country headed to their Senators’ offices with cupcakes in hand (see pictures below) and a strong message:

Protecting health care for moms, dads, and kids should be a *piece of cake*!

Turns out, the messaging was effective! MomsRising members, along with hundreds of other organizations across the country, worked hard to fight the Graham-Cassidy Bill, and at the last minute, the Senate decided it would not hold a vote on the bill. Once again, health care was saved!

MomsRising wants to thank moms all over the country that dedicated time and effort to fight the dangerous legislation proposed by Senators Graham and Cassidy. If it weren’t for efforts like yours, we couldn’t guarantee that Senators like Senator McCain and Senator Collins would come out opposing a bill that repeals the Affordable Care Act and guts Medicaid. As the healthcare fight continues, keep up the good, hard work!

MomsRising members in Phoenix, AZ deliver “thank you” cupcakes to Senator McCain for his decision to oppose the Graham-Cassidy Bill