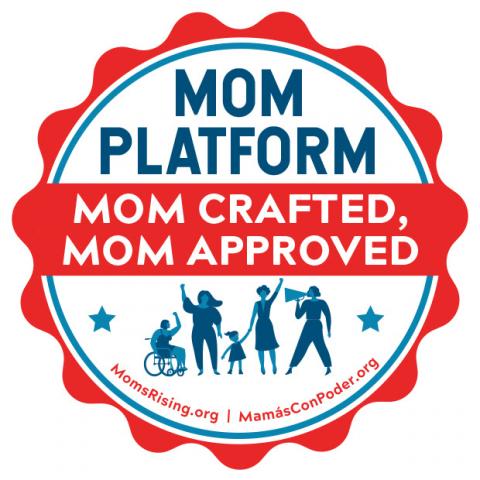 We're back with this week's list of top #5Actions from the past week, featuring hot items around defending equal pay, pregnant workers, and gun violence. We also need your input on which issues are most important for you so we can create our "Mom Platform" as we head into the next presidential election.

1. Your Input Needed! What issues should Presidential candidates prioritize?

BACKGROUND: June 10th was Moms’ Equal Pay Day, marking the fact that moms – across race and ethnicity – must work until June 10th of 2019 to earn what dads made in 2018 alone. Of course, averages alone don’t tell the whole story because, due to structural racism, moms of color face much larger wage gaps when compared separately. June 10th is also the 56th anniversary of the Equal Pay Act becoming law, yet we STILL don’t have pay equity. That’s the bad news about June 10th. BUT there’s good news too: We know how to close the wage gap! *Tell your U.S. Senators: Pass the Paycheck Fairness Act and support paid sick days, paid family and medical leave, and affordable childcare!

BACKGROUND: Discrimination is the last thing you should have to worry about when you're pregnant, but even in 2019 pregnant workers are still being denied reasonable, medically-necessary accommodations at work (like extra water breaks or being able to sit down) because of loopholes in the 35 year-old Pregnancy Discrimination Act. The Pregnant Workers Fairness Act would make it unmistakable: Employers must provide reasonable accommodations to pregnant workers who need them. Tell your U.S. Representative to support the *BIPARTISAN* Pregnant Workers Fairness Act!

BACKGROUND: Our hearts are broken with the victims and the families of the Virginia Beach shooting. More than 1,000 Virginians on average die from gun violence every year in the Commonwealth. Yet Virginia lawmakers have taken zero recent action to improve gun safety. The Republican majority in the Virginia General Assembly have blocked every effort to address gun violence in the Commonwealth, including killing a bill to ban sales of large-capacity magazines. Join us in saying SHAME — and in urging them to take action for gun safety at the next legislative session!

5. Tell Your U.S. Senators to Reauthorize the 2019 Violence Against Women Act

BACKGROUND: The U.S. House of Representatives voted to reauthorize the landmark Violence Against Women Act (VAWA). Now it’s the U.S. Senate’s turn. VAWA 2019 makes modest but important improvements to the original landmark legislation that passed in 1994, that has since provided a lifeline to tens of thousands of women experiencing abuse. VAWA 2019 closes the “boyfriend loophole” that would deny violent dating partners and stalkers access to firearms. It also provides important tools to law enforcement officers to help them better enforce existing law. Sign on to tell your U.S. Senator to reauthorize VAWA!