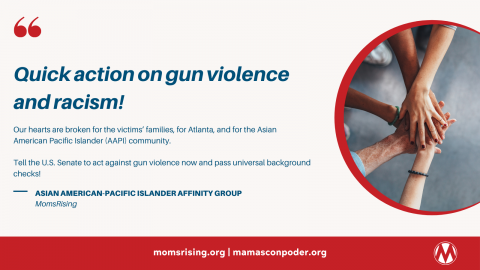 This week has been tough. The Atlanta shooting that resulted in the death of eight people -- including six Asian American women -- again proves that Americans can no longer wait for action against gun violence and hate. We stand against Anti-Asian hate and for gun control. The time for action is now.

In the five actions this week, we urge you to sign onto our petition to Congress demanding gun control and an end to racism; offer an opportunity to celebrate that the American Rescue Plan just became law, cutting child poverty in half, by signing a “Thank you!” note to President Biden and Vice President Harris; lift a petition for you to help to protect our democracy and voting rights; share how the EITC and CTC has helped; and help expand healthcare coverage.

There’s a lot to do, but together we are a powerful and unstoppable force!

Thank you again for all you do. 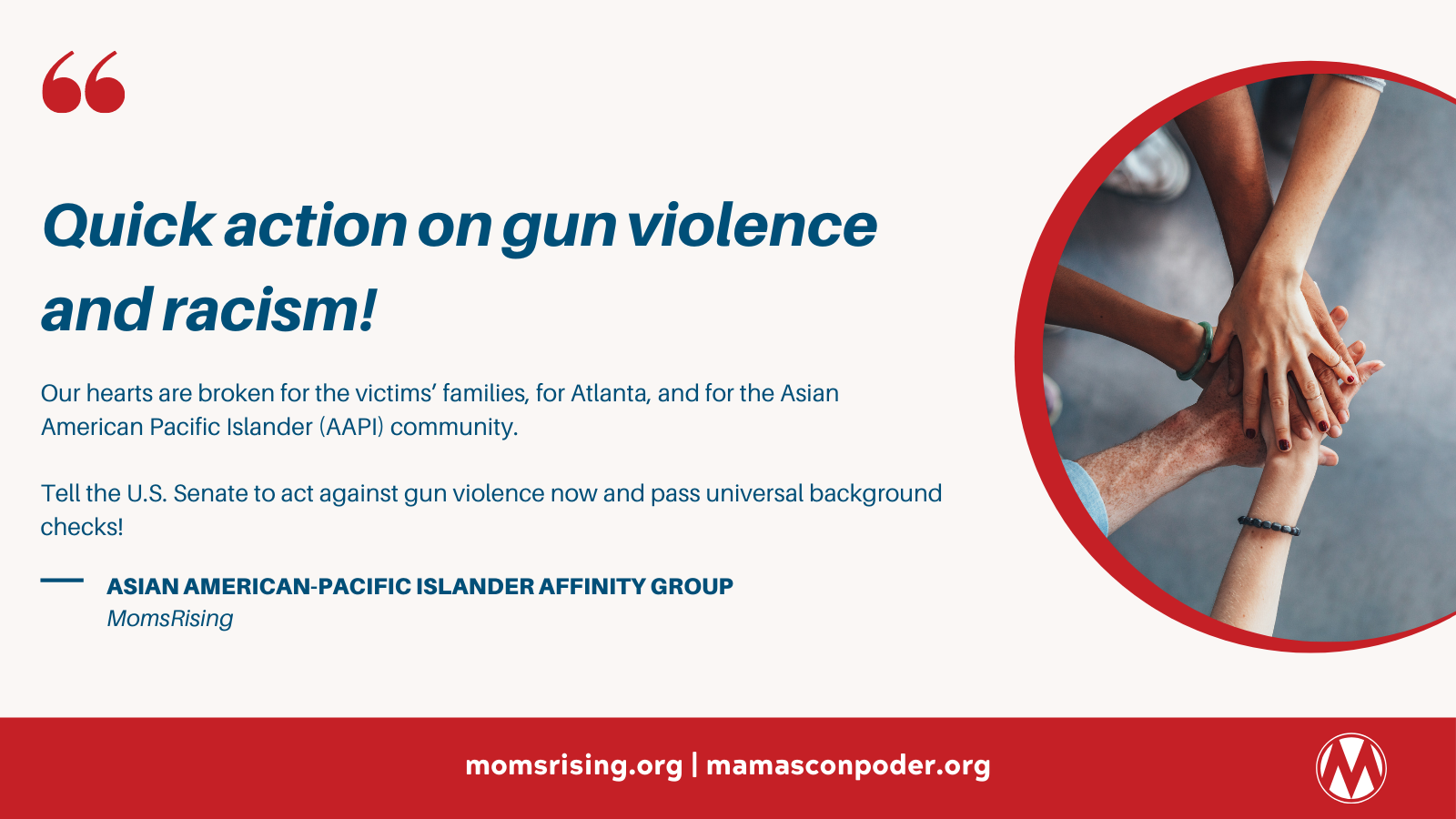 The Atlanta shooting that resulted in the death of eight people -- six of them Asian American women -- again proves that Americans can no longer wait for action against gun violence and hate.

In 2020 alone, as though the pandemic weren't already too much to bear, gun violence rose dramatically with over 19,000 people killed in shootings and firearm-related incidents. Tragically, who is harmed by gun violence has long been determined by race, ethnicity, or gender.

Asian American women -- and everyone -- deserve to feel safe. While we mourn the Atlanta shootings, we must also fight the explosive combination of guns, racism, and misogyny to reduce the likelihood of such tragedies ever happening again. 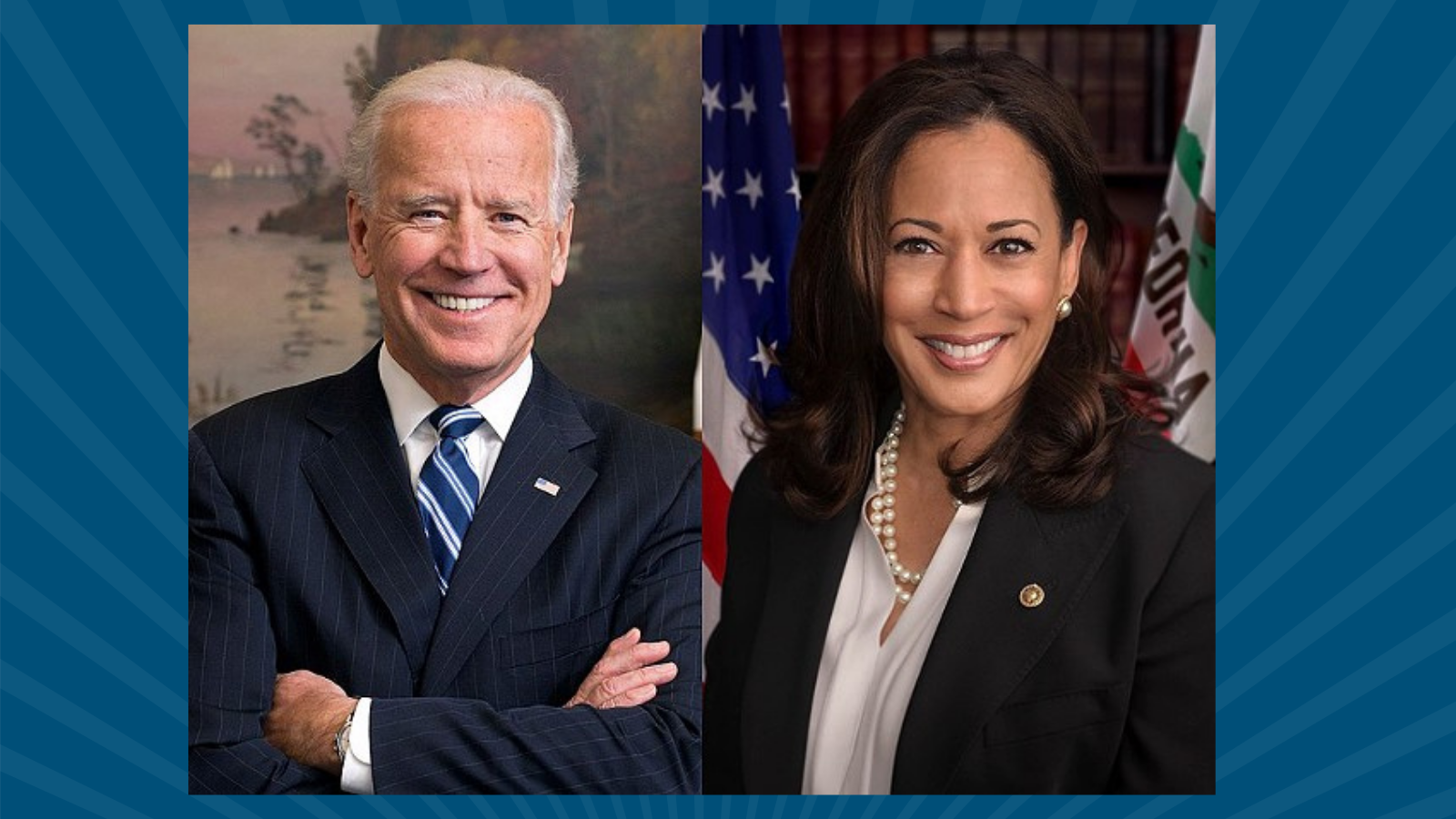 Join us in saying THANK YOU to Biden/Harris for passing the American Rescue Plan!

Families are in a state of emergency. That’s why we are so grateful to President Biden and Vice President Harris, as well as the Democratic leadership in the U.S. House and U.S. Senate for staying the course and getting the American Rescue Plan passed in the first 50 days of the new Congress and Biden/Harris Administration! This policy will cut child poverty in half, expand equitable distribution of the vaccine, increase access to healthcare, get much needed funding to schools, and more. We are celebrating the passage of this Act with a THANK YOU note that we are hoping you sign onto now. Showing our thanks for this important Act will help even more permanent, transformative change move forward in the (near) future!

Sign onto our THANK YOU NOTE to leaders who passed the American Rescue Plan! 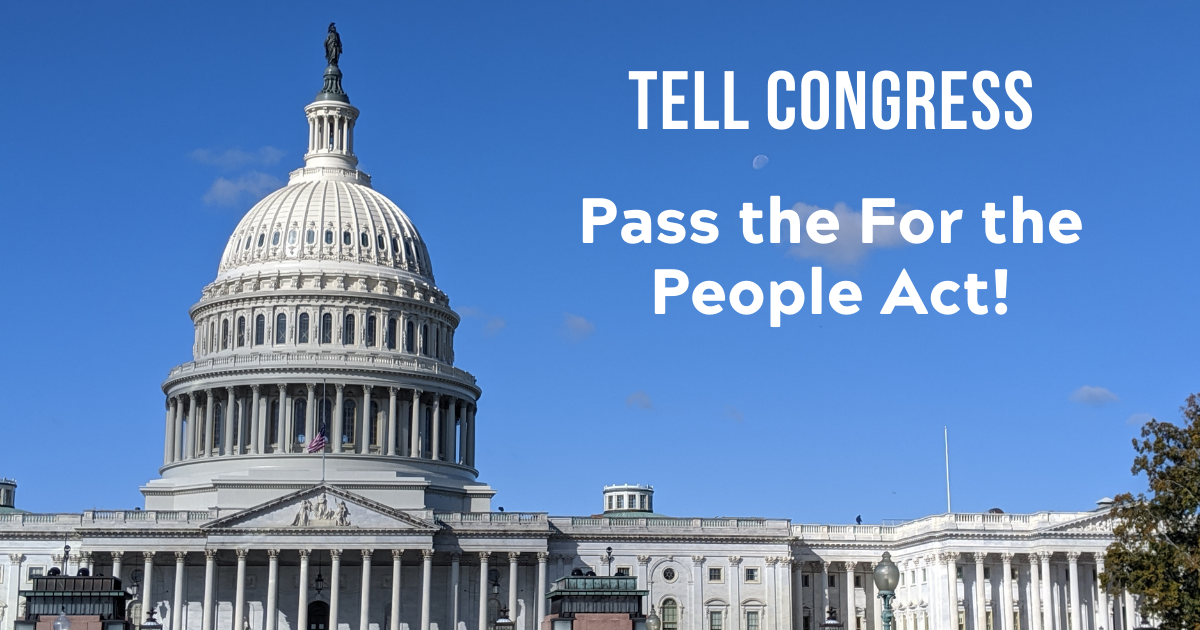 Great news! This week, the U.S. Senate introduced the For the People Act (S.1) which is a sweeping package of democracy protection reforms (and has already passed through the House!). For too long, there have been assaults on our democracy. Unnecessary barriers to voting, gerrymandering, and intentional voter suppression of communities of color is locking too many people out of our political process—and big money and corporate interests still dominate our political system.

Click here to urge your members of Congress to give power back to the people by passing the For the People Act! 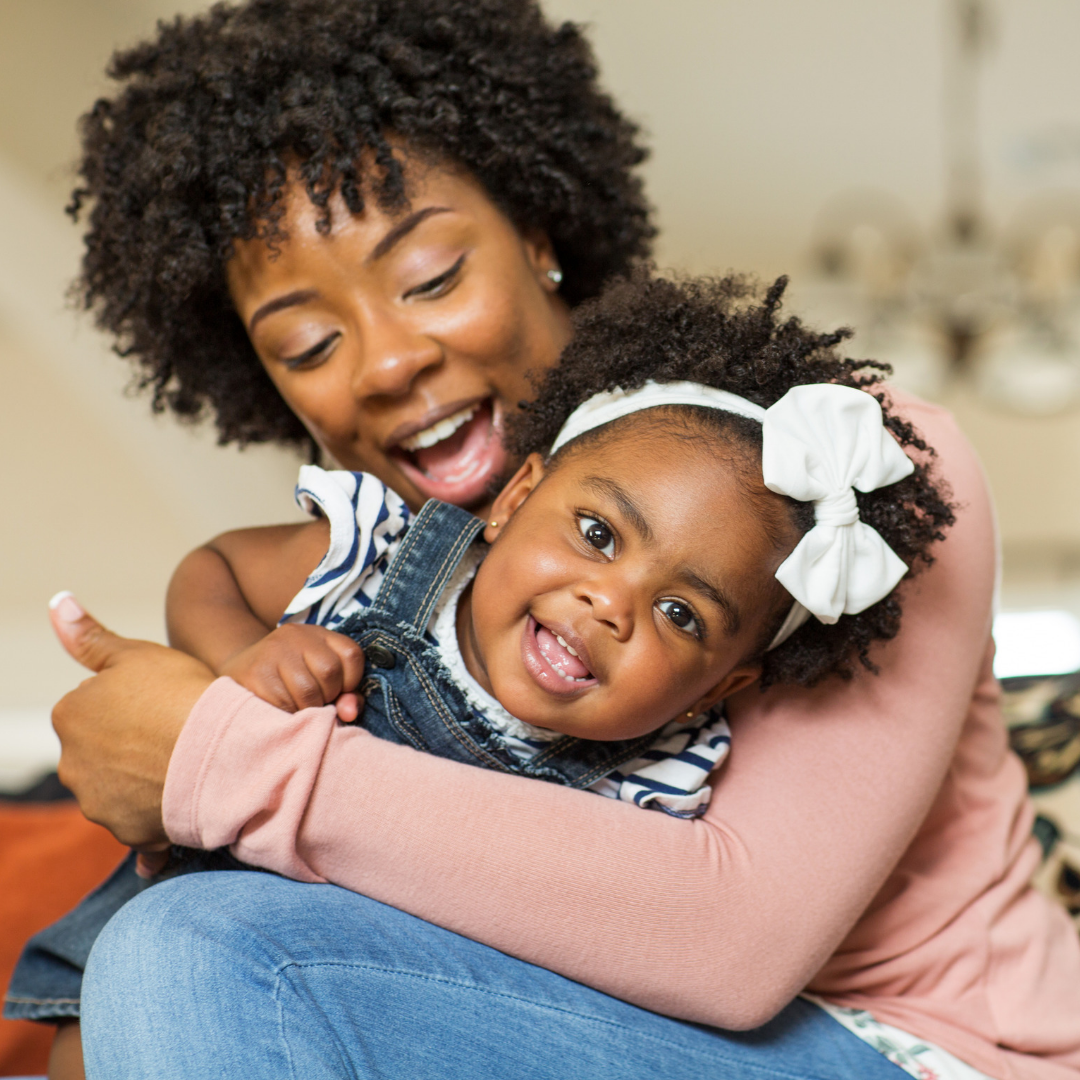 Share how the EITC & Child Tax Credit is boosting your family!

The recently passed American Rescue Plan included a major temporary expansion of the Earned Income Tax Credit (EITC) and Child Tax Credit, the results of which are almost solely responsible for the entire bill cutting child poverty in half. This is a major win! But we can’t stop there. We want to make sure these provisions are made permanent so families can benefit from this tax credit for years to come. Leaders in the U.S. Congress have already started drafting tax policies that could make major improvements to the EITC and Child Tax Credit permanent, boosting millions of families. Your experiences, along with the stories from other families across the nation, will help remind our leaders that we need policies that work for our families and not just mega-corporations.

Tell us how the EITC and Child Tax Credit make a difference for you and your family throughout the year. 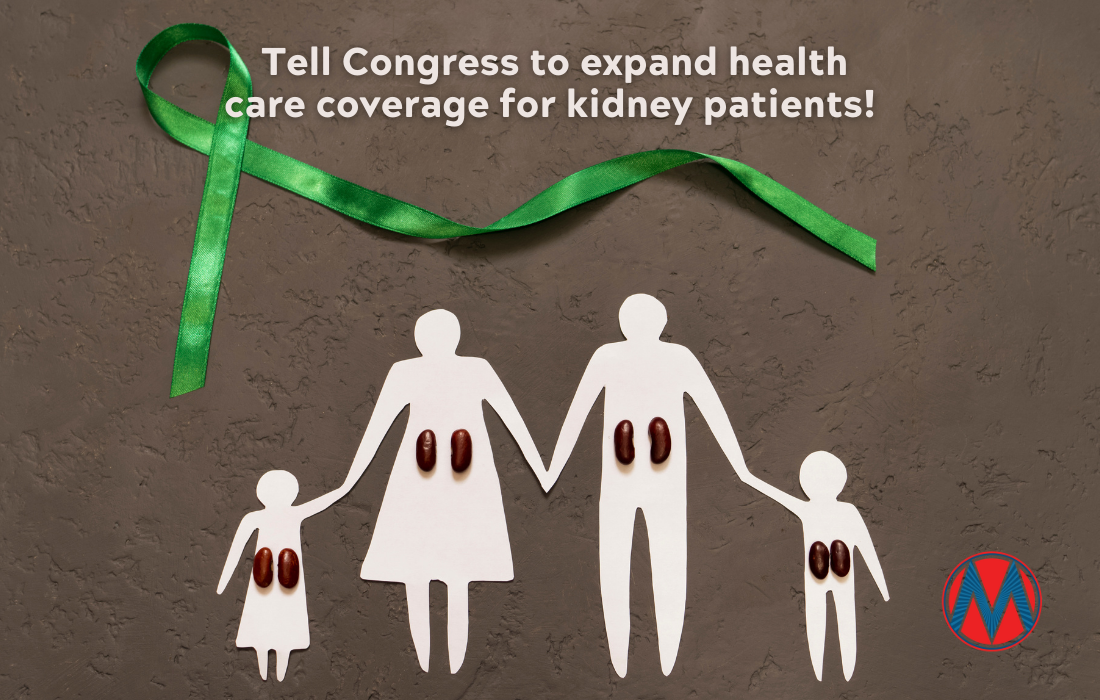 For people with End Stage Renal Disease (ESRD), their kidneys are beyond repair. This means they must regularly access dialysis treatments or receive a transplant and take medications to stay alive—all of which are incredibly expensive. ESRD is non-reversible and fatal without treatment and can impact anyone, at any age. ESRD also disproportionately impacts people in Black, Latinx, and indiginous communities, as well as people with disabilities (and is in and of itself considered a disabling condition). Additionally, almost 10,000 children and adolescents in the U.S. are living with ESRD.