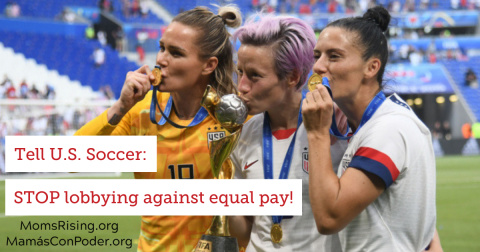 Summer is heading towards a close, and school and legislatures alike will soon be back in session. As we've seen, we can't take a break when it comes to speaking out about issues affecting our families and communities. THANK YOU to all who added their name to our urgent calls to action around family separation and gun safety this past week. Tens of thousands of us spoke out, and never fear: we are making progress. We need to keep the pressure on.

Please see this week's list of our top 5 Actions below, and be sure you've added your name to all. Scroll to the end for the actions around gun safety and immigration, if you missed signing those last week. And if you did sign them can you share with family and friends too? We're also including new actions around equal pay for the US Women's Soccer team, childcare, and WIC.

Thank you for all you do! On with the list =>

2. Make Congress Take Notice on Childcare with a Letter in Your Local Paper!

BACKGROUND: We hear daily from families who are struggling to find affordable, high-quality childcare. Right now, more than half of all Americans live in childcare deserts and, for those who can access care, the cost exceeds that of most major household expenses including housing. The recent increase in the Child Care and Development Block Grant has helped, but it's just not enough. That's why elected leaders need to hear from you with a letter to the editor in your local paper. Members of Congress and their staff pay close attention to letters to the editor in local newspapers as a way to gauge the opinions of constituents. Your voice is needed to let your elected leaders know that families back in their home state are standing up, taking notice, and are expecting them to support an increase of $2.4 billion for the Child Care and Development Block Grant in the Fiscal Year 2020 appropriations bill. This would mean childcare for up to 300,000 (!!!!) more children. We make it easy; get started here.

BACKGROUND: Millions of moms and babies are boosted by the Special Supplemental Nutrition Assistance Program for Women, Infants, and Children (WIC) each month, including more than half of all infants born in the U.S. But still there has been a steady decline in WIC participation over the years that could lead to negative health impacts for both moms and kids. That is why it is so exciting that a bi-partisan group of U.S. Senators have introduced the WIC Act to make improvements to this important nutrition and health program so more moms, infants, and toddlers can access the program. ADD YOUR SIGNATURE to our letter to the U.S. Congress now telling them to co-sponsor and pass the WIC Act this year!!

5. Tell Congress and ICE to Stop the Raids!

BACKGROUND: Hearing children like 11-year-old Magdalena Gomez Gregorio begging — BEGGING — for her parents after a raid in Mississippi, where over six hundred people were detained by ICE, is beyond devastating. We are traumatizing a whole generation of children and ripping apart families. We can - and have to! - stop this! ICE has the discretion to decide how and when they enforce policies, and Congress has the authority to restrict the funding to ICE that enables their #TrumpRaids. Tell Congress to restrict funding for ICE and tell Immigration and Customs Enforcement (ICE) to stop terrorizing children and our communities by putting an end to these raids and all forms of family separation!