This Week Let's Think About Mothers and Children....Everywhere

Happy Mother’s Day to all the moms and caregivers out there. I hope you were able to have one of those priceless “me days” that are so restorative.

There’s one group of moms I hope you’ll think about this Mother’s Day week: immigrant mothers who are separated from their children through deportation or detention.

Immigrants have moved to this country to make a better life for themselves and their families, seeking the promise of opportunity that America represents. But every day more than 1,000 people are deported, tearing apart immigrant families, even forcing 17 children a day into foster care. Of the nearly 2 million aspiring citizens deported since 2008, more than 200,000 are parents.

On April 30, we did something we’ve never done before at the AFL-CIO. We held a candlelight vigil and projected a slideshow on the front of our building that featured the stories and faces of immigrant mothers and fathers who were deported or are in danger of deportation for May Day, International Workers’ Day.

One of those mothers is Silvia, who has been struggling to raise her children on her own since her husband was deported. Now Silvia herself is in danger of being deported, even though her daughter has special needs. Her health care provider has written to the government asking that Silvia stay in America because of her daughter’s need for ongoing care. Silvia is desperate to stay here—to raise her children in the country the family calls home. See Silvia’s story from our light projection here.

Here I am (see picture below) standing with AFL-CIO President Richard Trumka and AFL-CIO Executive Vice President Tefere Gebre—taking part in one of the most moving labor actions I’ve ever been to. The energy was electric and people were singing and dancing. See more videos and pictures in the AFL-CIO Storify. 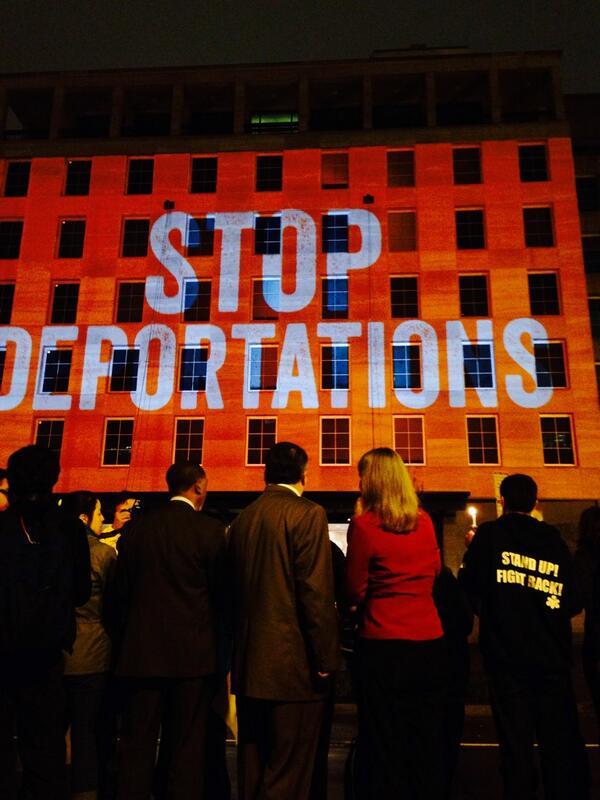 We in the labor movement have been speaking out against deportations for quite some time, and if you want to see this family issue eloquently put, look no further than Hareth Andrade-Ayala's poem "America," which she recited at the 2013 AFL-CIO Convention:

And last week, I stopped by the #BringBackOurGirls rally in Washington, D.C., to condemn the recent abduction of more than 200 schoolgirls by extremists in Nigeria. The AFL-CIO and the global labor movement are very concerned by the ongoing attempts by extremist organizations to deny women and children their right to a good education. We hope you will join us in standing up for these girls.