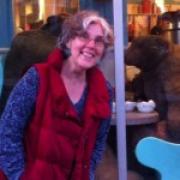 Virginia Raymond
Share This
Add your voice to the comments

I can’t sleep, thinking about Antoinette Tuff. What do I learn from her?

Certainly not how to “handle” or “deal with” or “manage” or, much less, “confront” a distraught man with guns and ammunition ready to kill a lot of people including himself.

In the first place, I don’t expect to ever be in her position. Yes, it could happen, but probably not, and I certainly hope not.

Second, if I found myself in a situation similar to hers, I doubt that I could keep my cool.

What Antoinette's actions, and her explanation of her actions, have the capacity to remind me is this: how to live on a normal day.

I have heard María Limón talk about “walking into a room heart-first.” It seems to me – from a great distance and based only on what “the media” tells me (however accurate that is or isn’t) -- that Antoinette Tuff had a wide-open heart, and that big heart was out front.

On a terrifying day, Ms. Tuff saw all the weapons that Michael Brandon Hill was carrying, but more importantly, she saw the person: “a young man who was really hurting.”

She recognized things in him that reminded her of herself, and of her son.

She communicated her felt connection to the young man with the guns. “We could be family,” she told him, and that she, too, had felt despair.

She told him her “story,” implicitly inviting and making it possible for him to empathize and connect with her. (A person who is feeling empathy towards a stranger is less likely to shoot her.)

What Antoinette Tuff did in extreme circumstances was to see and emphasize much more of what she and this heavily armed man had in common, than what separated them or what was different about them. She did not demonize him, but neither did she have to “humanize” him. Rather, she fully recognized him as a fellow human being from the start.

If Antoinette Tuff could see the human being behind the guns in the most extreme and frightening circumstance, why can’t I do that all the time, especially on the majority of days, when I’m not terrified? What's my excuse?

Or, since I don’t really “believe in” prayer as petition, what if I purposely concentrated on what was best in the person who had the potential to hurt me, who had already caused me damage, and was even on the brink of destroying me. What if I thought about what I hoped for this person: about the “best” she or he could become? What if I could imagine that person a year or two or three years in the future, calm and happy?

She tells us that she was “anchored in God.”

Not everyone is going to be able to do that: faith isn’t something that I can beckon. Faith (to me) is more like a butterfly. On a rare day, if I’m quiet, I may be lucky enough to have a butterfly land on my shoulder, but I can neither summon it nor keep it with me.

Too, what we may experience as an “anchor” can be some damaging delusion. “We are zealots for bad causes.”

What if those for whom “God” is not an anchor, we at least had an anchor in our best selves: those selves who are empathetic, courageous, and serene? Those selves, or aspects of our selves, seeking connection with other people? Acknowledging and encouraging our common sojourn on the plant even with those apparently threatening, radically “Other” people we NEVER invited into our lives and (initially) wish we had never met.

I never know what to believe. Even if Antoinette Tuff, or parts or all of her story were to turn out to be false, a giant overblown media fairy story or hoax, I have learned something from this heroic tale. I want to grow up to be just like Antoinette Tuff, or at least to grow a heart that big.