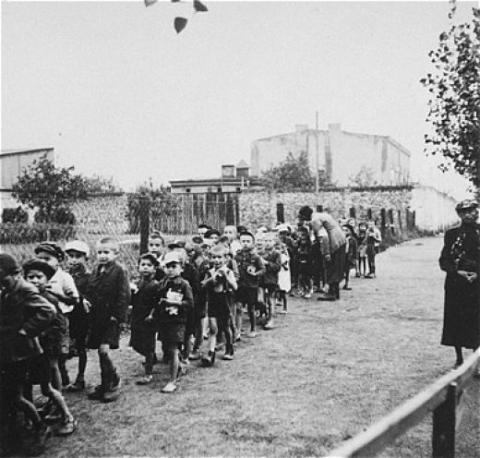 Children leaving the Lodz ghetto for the death camp at Chelmno

The price of collaboration

From visiting the wonderful Dutch Resistance Museum many years ago, I knew about the "Judenrat," councils of Jewish leaders that Nazis used to facilitate the implementation of their own annihilation.

Although I'm Jewish and believe it's important to remember the Holocaust, I never really spent that much time learning the political history. I foolishly thought that "never again" was an obvious and redundant slogan. But the similarities between our current political environment and the Weimar Republic in which Hitler climbed to power are unmistakable. And last week I discovered World War II Today, a site that walks us through the history as it happened, but exactly 75 years later.

The entry from a few days ago was shocking to me on two levels. First, that Nazis specifically targeted children for "deportation" (ie: death and torture at concentration camps). The parallels to recent policy discussion is clear and very troubling.

But equally disturbing is how, even after it was clear what their fate would be, the Judenrat leaders continued to facilitate the execution of their own people in the deeply misguided, arrogant, and counterfactual belief that they could somehow lessen the impact by helping the Nazis.

First it started with seemingly-acceptable policies like registering all Jews and distributing rationed food. You can imagine how some thought it would be helpful to do this. But like the frog in a slowly-boiling pot of water it became clearer and clearer that the end goal of all of these efforts was to extinguish the Jews.

With the benefit of hindsight, I have to wonder why Jewish leaders thought that they could trust German Nazis. How did they do the moral calculus comparing the value of collaboration against the possibly-deadly consequences of resisting?

Chaim Rumkowski was the Chairman of the Judenrat in the Polish Lodz ghetto. He gave this unbelievable speech on September 4, 1942:

A grievous blow has struck the ghetto. They are asking us to give up the best we possess … the children and the elderly.

I was unworthy of having a child of my own, so I gave the best years of my life to children. I’ve lived and breathed with children.

I never imagined I would be forced to deliver this sacrifice to the altar with my own hands. In my old age I must stretch out my hands and beg: Brothers and sisters, hand them over to me!

Fathers and mothers, give me your children! [Transciber’s note – Horrible, terrifying wailing among the assembled crowd.]

I had a suspicion something was about to befall us. I anticipated “something” and was always like a watchman on guard to prevent it. But I was unsuccessful because I did not know what was threatening us.

I did not know the nature of the danger. The taking of the sick from the hospitals caught me completely by surprise. And I give you the best proof there is of this: I had my own nearest and dearest among them, and I could do nothing for them.

I thought that that would be the end of it, that after that they’d leave us in peace, the peace for which I long so much, for which I’ve always worked, which has been my goal. But something else, it turned out, was destined for us.

Such is the fate ofthe Jews: always more suffering and always worse suffering, especially in times of war.

Yesterday afternoon, they gave me the order to send more than 20,000 Jews out of the ghetto, and if not – “We will do itl” So, the question became: “Should we take it upon ourselves, do it ourselves, or leave it for others to do?”

Well, we – that is, I and my closest associates – thought first not about “How many will perish?” but “How many is it possible to save?” And we reached the conclusion that, however hard it would be for us, we should take the implementation of this order into our own hands.

I must perform this difficult and bloody operation – I must cut off limbs in order to save the body itself – I must take children because, if not, others may be taken as well, God forbid.

I hope as you read this, you are wailing too. I hope that like me you will dedicate your entire soul to never trying to appease or compromise with those that would oppress and destroy people, even if you think your collaboration will lessen or delay the oppression. We can't always imagine what others will do, but we know who our friends are. Never forget.