The Fight for Racial Justice Continues 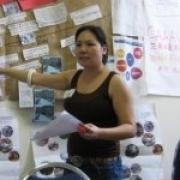 Helena Wong
Share This
Add your voice to the comments 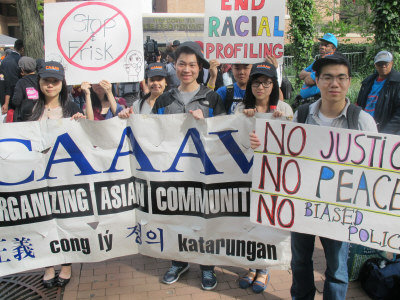 CAAAV Organizing Asian Communities (aka Committee Against Anti-Asian Violence) is a pan-Asian organization based in New York City that has been doing social and racial justice work since 1986.  We are rooted in low-income Asian immigrant and refugee communities and work to build the leadership of those most impacted by systemic and institutional injustice and violence.

We believe that policing and state violence affects everyone.  As Asians, we are often disregarded or looked at with skepticism when it comes to these issues.  However, we are clear that despite there being examples of success stories of Asians, that our communities have never been exempt from racism and white supremacy.  In fact, we see our struggles connected to struggles of color communities of color, queer communities, and other marginalized communities.

In the 1990’s CAAAV, along with organizations like the Malcolm X Grassroots Movement, the National Congress for Puerto Rican Rights, and the Audre Lorde Project, formed the Coalition Against Police Brutality to call out then-Mayor Rudolph Giuliani’s Quality of Life campaign that targeted poor people and people of color and criminalized people for minor offenses.  After the September 11th attacks, CAAAV was part of a national movement that voiced concern about the War on Terror and how it was a war at home and a war abroad.  In the past few years, as the New York Police Department has become as large as the world’s seventh largest military force, implemented surveillance programs that impact every single New Yorker, we are clear that our communities are less safe now than at any other time.

How does it translate to our day-to-day work?  In 2011, CAAAV’s youth members surveyed over 300 youth across the boroughs to understand what issues affect young Asians. Through the course of the survey project our youth realized that despite all the attention paid to biased-based policing and “stop-and frisks”, most young people did not know what their rights were. In 2012, CAAAV’s youth program produced a documentary about the impact of policing on Chinatown community members.  Since then, as a part of the city-wide Communities united for Police Reform (CPR) campaign and the People’s Justice coalition, CAAAV youth are conducting Know Your Rights trainings throughout New York City concerning police encounters and participating in broader calls for accountability within the New York Police Department.

Our commitment to racial justice and the eradication of violence for all people is a guiding principle in how and why we participate in this kind of work.  The names and the stories of Sean Bell, Yong Xin Huang, Iman Morales, Ramarley Graham and others are not forgotten by us.  If you have questions about our policing campaign or if you are interested in having CAAAV conduct a Know Your Rights training at your school or organization, contact us at justice@caaav.org.