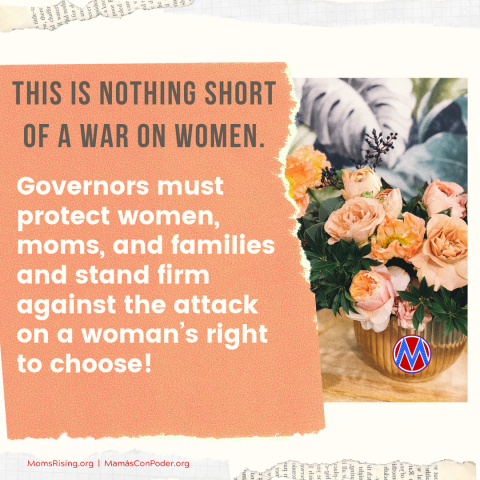 Tell Your Governor: My Body, My Choice!

Following on the heels of Georgia, Alabama just passed the nation’s most restrictive reproductive healthcare bill that, if allowed to go forward by the courts, would impose criminal penalties on any doctor who performs an abortion, even in the cases of rape and incest. As moms, we know the lifesaving importance of access to reproductive healthcare for ourselves, and we cannot even begin to imagine the horror of a high schooler who has been raped learning that terminating her pregnancy is a criminal action. Despite these horrors, Alabama Governor Kay Ivey immediately signed the bill into law.

* Join MomsRising in telling every governor that they must protect access to safe abortions and resist the attack on a woman’s right to decide when and how many children to have — or whether to have children at all — which is nothing short of a war on all of us, including mothers and our daughters.

Across the land, other states like Missouri and Louisiana are considering bills designed to provoke the reversal of Roe versus Wade, which protects a woman’s right to choose under the U.S. Constitution. (In good news, some states like New York are passing protections of a woman’s right to choose in response to the bans.) Ultimately, it’s up to governors to sign them into law. Signing such anti-choice laws signals a governor’s active participation in the war on women that wants to take away our bodily autonomy and our ability to make our own family planning decisions.

This coordinated effort to take away choice and deny reproductive health care involves states with some of the worst health outcomes for women, including high maternal and infant mortality rates. Politicians who say they value life should advocate for policies to solve the public health crises that are killing women and newborns, not dismantle women’s health care.

Governors must protect women, moms, and families, and stand firm against the attack on a woman’s right to choose, which is nothing short of a war on women.

Make no mistake, this war on mothers and women is not about reducing abortions. If the goal of those who are passing such severely restrictive laws was to avoid abortion, then they'd be passing access to free birth control, which is proven to lower abortion rates, not setting lifetime imprisonment laws for doctors who help women in need. What's really happening is a direct attack on women and moms having bodily autonomy, economic freedom, and sovereignty in our lives.

Twenty-five million women — that’s one in three women of reproductive age – now live in states in which abortion under any circumstances could be outlawed if the Supreme Court were to overturn Roe v. Wade. And this war on women, mothers, and our daughters particularly harms women in low-income families and communities of color, who face more barriers accessing reproductive healthcare.

Women are the foundations of families, communities, and the economy. Tell governors to protect women and stand firm against the attack on a woman’s right to choose.

Please share this blogpost with everyone you know who believes in a woman’s equal right to freedom and her own autonomy, and ask them to sign too.

P.S. We want to be perfectly clear: abortion is still legal in every state in the United States, including in Alabama, Georgia, Missouri, and Louisiana as these laws have not taken effect yet. If you or someone you know needs an abortion, you are perfectly within your legal right to receive one. If you need help accessing an abortion or paying for one, go to the National Network of Abortion Funds.

Take Action!
Stand Up For Our RIghts!