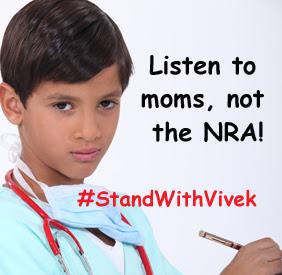 Tell Senators to Listen to Moms, Not the NRA!

Time is short! Tomorrow MomsRising is going to Washington, D.C. to urge our U.S. Senators to listen to moms, not the National Rifle Association (NRA)--and we need you to back us up!

Can you take a second to quickly tell your U.S. Senators to be on the lookout for us in their offices?

*Back us up now: http://action.momsrising.org/sign/BackUsUp4Vivek/

What's the lowdown?  The National Rifle Association (NRA) is working hard to derail Dr. Vivek Murthy’s confirmation to the position of U.S. Surgeon General because he, like many other doctors and associations, has said that gun violence is a "health care issue."  In fact, the New York Times reported: “The nominee, Dr. Vivek H. Murthy, an internist and political ally of the president’s, has come under criticism from the National Rifle Association," and the article goes on to detail that the pressure from the NRA seems to be working.

The NRA is out of step with the American public, opposing background checks for gun purchases even though over 90% of people support this measure, and now opposing the  U.S. Surgeon General nominee, Dr. Vivek Murthy, simply for stating the obvious.

So we are stepping up.  Tomorrow, June 3, MomsRising will dress up kids and tots in doctor's scrubs, lab coats and stethoscopes and deliver more than 200,000 signatures to U.S. Senate offices on Capitol Hill in Washington, D.C. Why? To tell them that gun violence IS a public health issue and that the health interests of America's families must be paramount for the choice of a U.S. Surgeon General.

We cannot become a nation where gun industry lobbyists get to decide who can be our nation’s foremost voice for public health. The NRA and the extremist gun lobby need to step away from the process of choosing the United States’ top doctor!

Will you back us up online by sending a quick note right now to let U.S. Senators know that moms and kids are heading their way? Tell them to look out for us, and that they should listen to moms, not the NRA!

Here's some background: Dr. Murthy, a Harvard- and Yale-educated doctor at Brigham and Women's Hospital in Boston, is President Obama's choice for our next U.S. Surgeon General. He has publicly expressed his opinion that guns are a public health issue. This provoked the NRA to start flexing its muscles to derail Dr. Murthy's confirmation, with key U.S. Senators indicating they may pull their support.

Given that more than 100,000 people are injured or killed with guns every year, including 10,000 children, it's easy to see why so many organizations and leaders have identified gun violence as the public health issue that it is today for our nation.

To keep this eminently qualified doctor from serving as the nation’s foremost champion of public health for a view held by the entire medical and public health establishment is nothing short of … ridiculous. That’s why moms and tots (dressed up as mini-doctors!!!) will visit U.S. Senators in person on Tuesday to tell them: “Listen to moms, not the NRA!”

Back us up online! Email a message to your U.S. Senator now and let him or her know we’re stopping by their office and to look out for us.  We've made it easy for you.  Just click below and you're done!

When it comes to health, moms want the best, most qualified doctors and medical professionals looking after our families, and that goes for the nation’s health too! Sign on now to defend public health against the meddling of the gun lobby and help confirm Dr. Murthy as our next U.S. Surgeon General!

And please also take a moment to share this blogpost with friends and family--and to post the action link (this one: http://action.momsrising.org/sign/BackUsUp4Vivek/) on Facebook and Twitter.  The more of us who write in, the bigger the impact we'll have together.

Together, we are a powerful voice for public health, healthy families and safe communities.

Take Action!
Back moms & kids up telling lawmakers "Listen to Moms, not the NRA!"