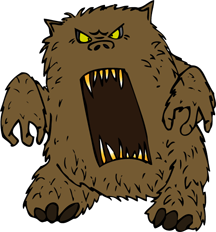 th, I found myself "roaring my terrible roar and gnashing my terrible teeth and rolling my terrible eyes and showing my terrible claws," because the Senate failed to pass the Manchin-Toomey Amendment, which would have expanded background checks for gun purchases and is a measure that 90% of the public supports.

The failure to pass background checks provoked a wild rumpus across the land, in some places directly against the lawmakers who voted against background checks. For example, in New Hampshire, Sen. Kelly Ayotte faced intense public confrontations by gun violence survivors, and her favorability ratings fell a whopping 15 points. The backlash against Sen. Jeff Flake in Arizona was so great, that on his Facebook page he admitted that his vote helped place him “somewhere just below pond scum.”

The uproar is keeping gun policy reform alive, and now there are movements for stronger background check laws in both the Senate and the House. Reps. Pete King (R-NY) and Mike Thompson (D-CA) have introduced a House version of a bill for strengthening background checks, which is already being co-sponsored by more than 170 House members. The more House members co-sponsor the bill, the more likely it is to advance and get a vote.

On the Senate side, five – just five – “nays” stopped background checks from going forward. Senate leaders have promised to bring background checks back for reconsideration if it looks like they can find the supporting votes.  Several Senators are said to be re-considering their positions. And we know the Senate is looking to the House, too, to gauge how strong the momentum is for passing new background check legislation. More leadership from the House will send a critical message to the Senate that this issue isn’t going away and elected officials who listen to their constituents will be out in front of this issue.

More than 30 people are killed with guns each day in our nation, according to the CDC. On June 14, just a few weeks away, we’ll be marking the sixth month anniversary of the Sandy Hook Elementary School shootings, nearly the fifth month anniversary of the tragic death of Hadiya Pendleton, and wondering what our elected representatives have done so far to reduce gun violence. In those same six months, gun violence will have taken more than 4,000 lives - people who were loved, needed and valued by their families and communities.

Now is the time to be heard. Together, we must continue the wild rumpus as we think about the safety of our children and communities. Together, we’ll be a strong voice for safer kids and safer communities.