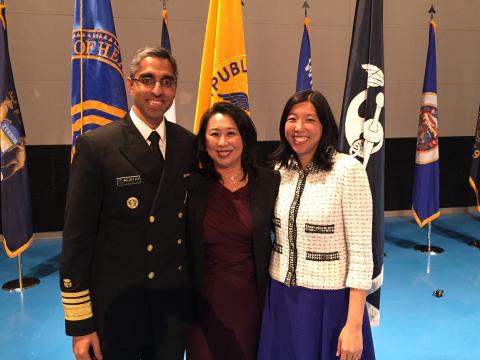 Dora Wang, M.D.
Share This
Add your voice to the comments
Surgeon General Vivek H. Murthy, MD, MBA, envisioned a Great American Community, at his  ceremony of oath, April 22, 2015, at Comny Hall in Virginia,  With the flags of 50 states behind him, and his immigrant family seated before him, Murthy began the ceremony in a white shirt and tie, but concluded wearing the decorated coat of a Vice Admiral.
Vice President Joseph Biden, Health and Human Services Secretary Sylvia Burwell and outgoing Surgeon General David Satcher, MD, were among the officiators of the ceremony.  Murthy's fiancee, Alice Chen, MD, Director of Doctors for America, also addressed the audience.  The ceremony was broadcast live on Twitter Periscope.
The Great American Community, according to Murthy, would have several key characteristics--the urban fabric of an active, pedestrian community; tobacco free campuses and public housing; and smoking eliminated from children's entertainment.
"In the Great American Community," Murthy continued, mental health would be considered "part and parcel of overall health."  Civic leaders were invited by Murthy to ignite conversations about mental health, and to bring the topic "out of the shadows."  Murthy encouraged America to "speak up and speak out" against violence.  In Murthy's Great American Community, individuals won't hear a woman being beaten in an apartment down the hall and say, "That is not my business," but say instead, "That is my sister."
Murthy began his speech with a proud nod to his own beginnings, as the son of Indian immigrants, who settled in Miami, Florida.  He recalled an evening when his father, Hallegere Murthy, MD, drove his mother, sister and himself to a trailer park, to comfort a woman had just lost her husband to cancer.
At age 38, Murthy is the youngest Surgeon General in US history.  Tech-savvy, and a social entrepreneur, Murthy has founded several organizations including VISIONS, an international HIV/AIDS educational organization; TrialNetworks, dedicated to efficiency in clinical trials research; and Doctors for America.  Murthy's other credentials include an undergraduate education and MBA from Harvard, and an MD from the Yale School of Medicine.
As co-founder of Doctors for America, Murthy has already succeeded in the task of mobilizing doctors around the nation to unite, to write editorials, and to canvas for health insurance enrollment--in their spare time, without compensation. How's that, for leadership?
As avid users of technology, Murthy and Doctors for America sprang to action when the American Medical Association initially opposed Obama's healthcare reform.  DFA collected thousands of physician signatures in support of health care reform, within a period of weeks, utilizing email and new technology.
In the war against disease, the nation's new Surgeon General brings new tools and a new kind of leadership to the job.