Stop! Don’t Listen to Advice that Women Can Plan Our Way to Worklife Fit 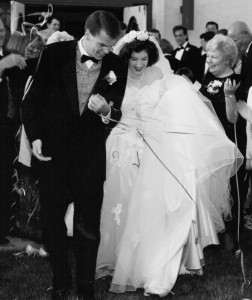 I am so fed up with advice from people telling women that if they just make the right personal choices at the right time in the right order then there is no problem fitting career, marriage, and kids into our lives.

That's a load of crap. If anyone had been able to figure out a way to PLAN her way through this mess it would have been me.

Let me just take one example of this kind of advice - Facebook COO Sheryl Sandberg tells women in commencement addresses and TED talks:

"The most important career choice you'll make is who you marry. I have an awesome husband, and we're 50/50...having a supportive spouse -- a real partner -- will play a huge part in your success."

The implication is that as long as you marry the right guy you'll be fine, and if you aren't fine, well, you made the wrong choice. Too bad.

My "awesome husband" David and I were married seven years before our daughter was born. While I don't believe we thought of it as a "career choice" we certainly married because we shared a vision of our future together. And for seven years we shared household chores and generally tackled life together, as "real partners." We always assumed we'd both have careers when we had kids, and that we'd share parenting "50/50."

Then within a few short months of our daughter's birth, our lives turned into something more like a 1950's Leave it to Beaver episode.

Five days after our daughter was born, my husband had to go back to 70 hour workweeks or risk losing his annual bonus. The firm had no process for dealing with paternity leave in the bonus structure. So he didn't take any.

As a matter of pure survival and sanity since I was the only one in the house, I became acutely attuned to baby Kate. How to get her to sleep, how much she would eat, how long we could be out of the house before the next nap. Each time Kate cried at night, I dragged myself out of bed so David could be fresh for work the next day. With David gone 10-12 hours a day, I soon became the more practiced parent and the default person for laundry and cooking and cleaning too.

I prepared to return to work after 12 weeks. During my pregnancy, my proposal to go half-time in a job I'd had for years had been turned down because the budget structure only allowed my manager a specific number of full-time employees. I had resigned from that job and happily taken a new job at a company that offered me the opportunity to work half time for a while after our daughter was born.

The day I returned from maternity leave to my new job, I was laid off.

So three months into "the plan" that said we would both continue our careers and share parenting 50/50, instead we found ourselves in the 1950's and became June and Ward Cleaver.

With no immediate options for him to work less and me to work more so we could also share more parenting, our vicious cycle continued. Me doing everything at home. Him working nonstop. And the two of us fighting in the kitchen over whose fault this all was.

The problem was not that I failed to choose "an awesome husband." I had one of those.

The problem was our well-laid 21st century plans and choices had run into a rigid 1950's workplace model, which then thrust us into a vicious cycle of taking on traditional 1950's roles at home that we had never intended.

All of this advice that implies women can simply plan and choose our way through today's worklife challenges - marry the right guy, don't lean back, choose a family friendly career, have kids early, have kids late, freeze your eggs, just ask for flexibility- actually prevents us from taking effective actions.

If I think I planned wrong and chose the wrong guy, there's not much I can do about that but blame myself - and him. And listen to advice we know is absurd on some level.

If instead I know that the 1950's model of work and the vicious cycle we fell into are the problems, those my husband and I can remodel together. And you can too.

So invite me to your next commencement address instead. I'll bring my "awesome husband" along and you can listen to us share how it was the choice we made after we got married, the choice to remodel everything together, that played a huge part in our success.