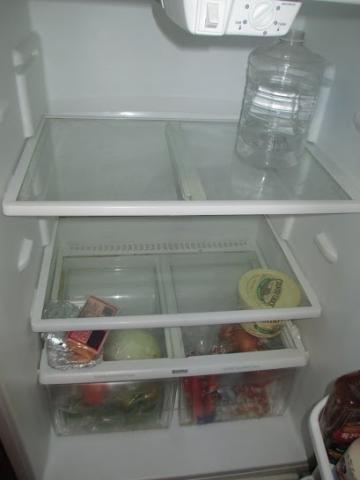 Photo Credit: "The Fridge When It’s Empty” by Christie I. from Camden, NJ

This post, authored by Kate Scully, originally appeared on TalkPoverty.org. The Supplemental Nutrition Assistance Program (SNAP) boosts the food security of millions of Americans. TalkPoverty.org is dedicated to demonstrating that we know how to dramatically reduce poverty; we just need to build the political will. Make sure to like TalkPoverty on Facebook and follow us on Twitter!

SNAP has helped to keep food on the table and in the fridges of families for five decades. It is also a program that helps keep kids and families healthy in times of need.  Yet, despite its success, SNAP often faces political attacks that result in cuts to its funding.

One significant cut occurred almost a year ago on November 1, 2013. Every family participating in SNAP saw their benefits reduced, meaning less food and fewer meals.  The impact of this and other cuts helps to show the importance of SNAP and demonstrates why it should be strengthened and celebrated instead of demonized and diminished.

It is critical that we learn and share more about SNAP—what it really does for families and why it is so important to millions of Americans.  We need to help people understand that the program is a strong anti-poverty measure that helps families thrive.

That’s why on Thursday, October 30 from 2:00-4:00 ET, the Center for Hunger-Free Communities, Witnesses to Hunger, and over 40 other organizations will tweet and post about SNAP using #snap4SNAP.  We will post pictures, information, and stories about SNAP, and we hope you will join us.

Members of Witnesses to Hunger are kicking off the #snap4SNAP campaign today at TalkPoverty with these reflections on the role of SNAP in their lives:

“My youngest daughter, Prayer, is 5 years old and has severe food allergies – to wheat, eggs, peanuts, and tree nuts. To keep her healthy and safe I need to buy her food from specialty stores, which costs a lot of money. With the cuts to SNAP, it has been even more of a struggle to make sure she gets the food she needs. And in that process, I’ve had to make tough choices, taking away some of the money I allot for food for my other daughter in order to feed Prayer. Taking food away from one mouth to try to feed the other – it’s terrible. And if I can’t get the proper nutrition, I’m of no good to either one of my daughters.”

Juell is the mother of two girls. She graduated from medical assistance school, and is working on getting a Bachelor’s degree in human services. Juell wants to see changes in Boston, including holding landlords responsible and creating clean and safe environments for families.

“Families depend on SNAP every month. Any cuts to SNAP were just crazy – they make things harder for families who are already struggling.”

Tiffany is the mother of one daughter, Zaniyah. Zaniyah’s father, Troy, was shot and killed while Tiffany was still pregnant. Tiffany was living in a homeless shelter for young mothers, and is now in an apartment subsidized by the shelter. She completed a community college program on a scholarship and now works as a pharmacy technician.

“I know what it is like to struggle to feed your family.  I have four children and I rely on SNAP to ensure my kids and I have enough to eat.  As the cost of food increases, it gets harder and harder for parents like myself to feed our families.  I already know that I am not giving my children the nutrients they need simply because I cannot afford it.  Like all other SNAP participants, I received a cut in November. And now, since I live in New Jersey, I will face another major cut thanks to “heat and eat” provision cut from this year’s Farm Bill. I cannot tell my children, ‘I’m sorry we don’t have anything for dinner tonight.’  My 14 year old eats 4 or 5 times when he comes home from school because his class eats lunch before 11 o’clock each day.  He is hungry when he gets home and I do my best to try to fill his belly. Any reduction in SNAP benefits will mean I have to take money from paying my bills to use at the grocery store since I don’t have any buffer to help make up for this loss, meaning my son will be hungry.  My SNAP benefits already did not last for the month. I was already struggling to keep food on the table. SNAP needs to be protected, and supported! Not taken away from families who are just trying to do right by their kids.”

Anisa is the mother of four children and grandmother of a 4 year-old. She is helping to raise her grandson while her daughter works two jobs, and she is also supporting her oldest son, a full-time college student.

“I already work to stretch my SNAP benefits by shopping around for the best deals and I go to three food pantries – but especially after the November 1st cuts last year I still don’t have enough to last the month, and it has increased my stress and decreased my food supply.  My son loves bananas and I would love to encourage him to eat more fruits but I can’t afford them and they aren’t available at food pantries.  No parent should have to worry about whether their child will be ok, whether there will be enough food for them to eat, whether you will have dinner for them after school but I do worry.”

Bonita is a mother of five, ranging in age from 6 to 26. She currently cares for her young niece whose parents both work but cannot afford safe childcare; once her niece goes to pre-k Bonita hopes to return to full-time employment to better the lives of her family members.

“I go to the pantry at the New Haven Salvation Army. I took a picture of the sign outside that says, ‘Emergency Pantry.’ It says it’s an emergency, and before I could use it as an emergency. But since the cuts to SNAP, the pantry is now a part of my monthly budgeting for food.”

Kim is an advocate for social and economic injustices.  She is also a member of Mothers for Justice, the New Haven Food Policy Council, and the Food Assistance Working Group.

“It’s a tragedy that we constantly have to prove that we exist.  With the November 1st cuts we were again pushed further and further away from the assistance we need to provide stability for our families.  We are taught as children to fight for what we believe in and take a stand.  Witnesses to Hunger will continue to do just that.”

Barbie is the mother of one son and one daughter. She was featured in the documentary A Place at the Table, sharing her experience of struggling with food insecurity and the cliff effect. Today, Barbie is an honor-roll student at Ezperanza College where she studies criminal justice.

Join us this Thursday as we snap into action to celebrate SNAP.  You can take part by signing up here or simply hop on Twitter, Facebook, and Instagram today from 2:00 – 4:00pm ET and search for #snap4SNAP.

Kate Scully is the Policy Director of the Center for Hunger-Free Communities, a research Center at Drexel University’s School of Public Health that finds science-based solutions to hunger and poverty.