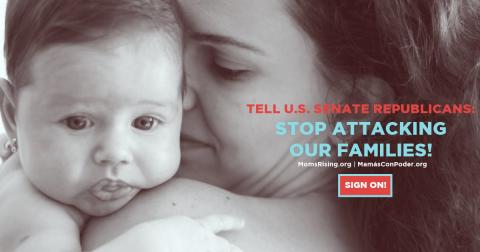 SIGN: Protect Medicaid, Vote NO on the Healthcare Bill

We have bad news to share and an URGENT need for you to take action ASAP to help save health care. Here’s the bad news: If there was a contest for the worst health care bill, the U.S. Senate Republicans’ bill, released this morning, would win it. It’s out of touch, out of line with our nation’s priorities, and damaging to our families and economy. It’s unconscionable.

This is an emergency. Take action to protect healthcare now! Tell the Senate Republicans to stop attacking families by threatening the health of our children and communities in order to give tax cuts to the wealthy.

* This is our very short, but very direct letter to every US Senator you can sign onto:

“Stop attacking families by threatening the health of children and communities! Vote NO on the incredibly destructive “Better Care Reconciliation Act,” and do your job representing your constituents by protecting healthcare including the Affordable Care Act and Medicaid!”

(After you sign, your name will be added onto the letter and a call-in number will pop onto your screen in case you have time to double down today. We hope you do! It’s an emergency.)

Our voices are needed to help stop this trainwreck. The bill released this morning would plunge tens of millions of moms and families into crisis, end Medicaid as we know it, and devastate our economy. The cuts to Medicaid, which covers nearly one half of the births in our country, ten million people with disabilities, and 70 percent of nursing home residents, are more devastating than even in the House version of the bill. Supporters of this bill are prioritizing tax cuts for the wealthy over the health and lives of infants, children and families. No wonder the drafters were hiding while writing this bill. It is nothing short of shameful.

With a click, sign on our open letter to tell the US Senate Republicans: Stop attacking families by threatening the health of attacking our children and communities!

Time is short. This bill is on a fast track to being voted on. Each and every one of us needs to make our voices heard ASAP to our US Senators. It only takes a moment, but could save lives.

This bill is a ridiculous assault on families. We all know that everyone gets sick, needs health care help, or ends up in an ER with an injury at some point. A full 82 percent of women become moms and need maternity care and 99 percent of women will use birth control. That's life. That’s normal. Yet, under this Senate Republicans plan, being a woman is basically a pre-existing condition. And that’s just the beginning of the problems with this bill, which is a direct attack on families.

It’s on us to remind Senate Republicans that needing health care isn't a weakness. Access to it, however, can be a lifesaver, economy-saver, and a way to strengthen children, families and our country. The Senate Republicans need to shift their perspective 180 degrees and do their jobs: Represent their constituents who polls show do not support their regressive direction and who know that access to health care should be a right for all, not a privilege for only the wealthy few who can afford it.

To be clear, action is needed because this bill is the very definition of "mean," which is how President Trump characterized the House health care bill. It's vicious and would be the start of a national health care, family and economic crisis. The Republican plan would strip health insurance from tens of millions of families, charge families dramatically more for coverage that would utterly fail to address their needs, and price people who need coverage most out of the market. The plans that would be available would be less adequate and offer fewer protections – in many cases, excluding coverage for mental health care, maternity care, birth control, and prescription drugs. The Senate legislation would also defund Planned Parenthood, undermining women’s access to the primary and preventive care they need.

Further, the Congressional Budget Office will surely conclude that, like the House bill, the Senate version would be an unmitigated disaster for the country. People who live in medically underserved communities would certainly suffer the most, including low-income families and people who are older, have disabilities, or live in rural communities, with a compounding impact in Black, Latinx, Asian, Native American, and LGBTQ+ communities.

It is abundantly clear why Senate Republicans hid this bill for so long – because it would devastate families and our economy, only to offer enormous tax cuts to wealthy individuals, insurers and pharmaceutical companies. No responsible senator should prioritize tax breaks for the wealthy and powerful corporations—ever—especially when it comes at a cost to our health.

The public has been very clear that repealing the Affordable Care Act (ACA) and damaging Medicaid is unacceptable. The Senate proposal is not what the country wants or needs. It doesn’t need tweaks designed to win additional votes; it needs to be discarded or defeated. Senate leaders should scrap this bill and stop actively trying to sabotage the ACA and Medicaid. Instead lawmakers should work together to strengthen the ACA so it does even more to address the health care needs of America’s moms and families—and safeguard and strengthen our country’s economy.

—> Please take a moment to make your voice heard. The clock is ticking toward the vote. So now is the time to tell Republican Senators to stop attacking families by threatening the health of our children and communities.

Here is the action to take: http://action.momsrising.org/sign/stop_attacking_families/

The vote is expected to be soon, so we need as many people as possible raising their voice. Please post this action link on Facebook and Twitter, forward this email, and help us have the biggest impact we can in saving healthcare.

Take Action!
STOP the attack on our families' health care!