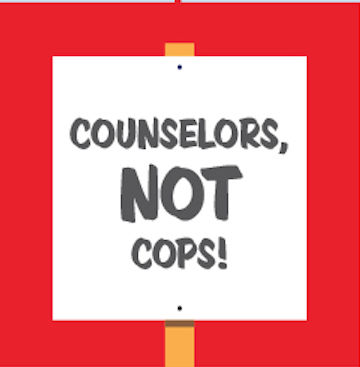 There was yet another violent police attack on a child in school last week. We are once again enraged.

[Content Warning: we describe the incident in this paragraph.] This time, a young Black girl at Liberty High School in Kissimmee, Florida was literally slammed to the ground by a sheriff’s deputy from the Osceola County Sheriff’s Department. Witnesses state he attacked her after a disagreement between students, in yet another wanton and horrifying example of why cops have NO PLACE in our schools.

As moms and parents we are once again horrified. And angry. And determined to make sure this does not happen again.

The fact is: we too often assume that the presence of police in schools is synonymous with safety. It is NOT. And like the police outside of school, data increasingly shows that police in schools, often called SRO’s (school resource officers) disproportionately target Black children and push them into the juvenile and criminal justice system. The presence of SRO’s literally institutionalizes racism in our schools and we won’t stand for it.

*SIGN ON WITH US: Putting kids first means counselors, nurses, and social workers, NOT cops! The time to change this is NOW! Tell Congress to support the Counseling Not Criminalization Act.

This wasn’t an isolated incident. Nationally, Black children are about two times more likely to be arrested in school than white children, and in some states like Maryland, the number jumps to three times more likely. This is not because Black children misbehave more but because they are punished more often and more harshly than their white peers. This latest incident in Florida says it all. And this has to stop.

We ALL want schools to be safe, but there is NO evidence that increasing the number of police in schools actually improves school safety. In fact, the presence of police is making schools unsafe for children of color and students with disabilities.

School counselors, nurses, social workers, and psychologists are trained to support children, and in schools where these professionals are able to provide services we see improved attendance rates, better academic achievement, and higher graduation rates. These same schools also see lower rates of suspension, expulsion, and other disciplinary incidents. The data on this is clear. The presence of school-based mental health providers doesn't just improve outcomes for students, it can also improve overall school safety.

*Tell Congress to stand up for students and invest in counselors, nurses, and social workers, NOT cops!

Districts are regularly forced to make draconian cuts to budgets, leaving too many schools without sufficient resources to meet the individual needs of all students. Funneling money into school police and the criminalization of children is not the answer to creating safe school environments. In fact, it is causing daily harm.

National and local research consistently demonstrates that the presence of police in schools serves as an entry point to the school-to-prison pipeline and disproportionately harms Black, Indigenous and Latinx students; students with disabilities; and students in need who are furthest from opportunity. The reality is study after study show virtually no gains from having police in schools.  There are measurable ways to increase school safety that don’t promote the school-to-prison pipeline and have been proven to be successful. These measures include restorative approaches, more mental health staff and counselors, social-emotional learning, and trauma-informed care in our schools. The Counseling Not Criminalization Act is an important step towards shifting resources away from practices that harm and push kids out of school and toward supports that help students thrive, keep schools safe, and end the criminalization of kids in schools. Please add your name now.

Take Action!
Speak Out for Counselors Not Cops In Schools!