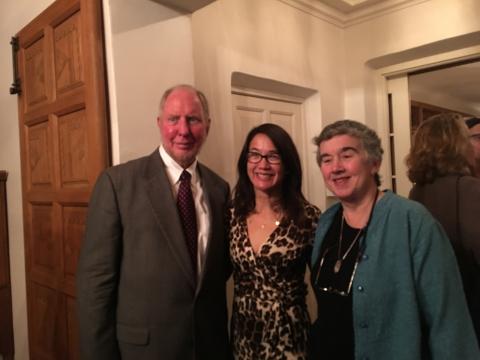 America has become two separate and unequal societies, especially when it comes to opportunities for our children.  Yet this can and must be reversed, for hope to be restored, and for America to keep its place in the global economy.   These themes were conveyed by Harvard Professor Robert Putnam, advisor to three US Presidents, who gave a series of lectures in New Mexico, one of the nation’s poorest states, on January 5, 2017.

To an audience of community members at Los Poblanos Historic Inn, Putnam began with an example of his own hometown, Port Clinton, Ohio, where in the 1950’s, “success was dependent on your own skills, not your parents’ income.”  Putnam became a college professor.  Joe, also from Port Clinton, chose to work, rather than attend college, as did members of Joe’s family.  For years, the income of Joe’s family exceeded the Putnam’s.  Then the local economy collapsed, and jobs were lost.

The opportunity gap can be illustrated by two children of Port Clinton today, Miriam and Mary Sue.  Miriam, his own granddaughter, finished high school and attended college at Haverford.  On the other hand, Joe’s granddaughter, Mary Sue, was abandoned by her mother when her parents divorced.  According to Putnam, working class children like Mary Sue no longer have the stability of family, schools, coaches or preachers, and are left with “No air bag.”  Mary Sue has said, “Love hurts.  Trust kills.”  Mary Sue has sold marijuana.  On the other hand, if Miriam were engaged with drugs, “I’d call a lawyer,” Putnam said.  Mary Sue’s situation exemplifies “a huge talent waste.”

The collapse of social institutions and safety nets are responsible for a large part of the growing economic and opportunity gaps in America.

“D-U-M-B in the international talent race” is one of the results of opportunity gaps in an increasingly segregated America, said Putnam.  “It’s setting our country on a very dangerous path.”

Putnam, however, ended on an optimistic note.

“America has been here before,” he said.  He spoke of the “Gilded Age” at the end of the 19th century, as portrayed in F. Scott Fitzgerald’s novel, “The Great Gatsby.”  The gap between rich and poor resulted in high political tension.  Jacob Riis’ expose of the tenements of lower Manhattan, “How the Other Half Lives”, exposed squalid living conditions.

Importantly, high schools were invented by American citizens.  During the “High School Movement” between 1910 and 1940, high schools were built across the country.  Whereas about one-fifth of kids attended high school in 1910, the percentage increased to approximately three-fourths of Americans by 1940.

“Shared investment in everyone’s kids was key to American growth and fairness in the past and it is key to restoring the American Dream today,” Putnam concluded.

Solutions include the encouragement of stable, caring families through boosting jobs and wages for low-income workers, along with criminal justice reforms.  High quality early childhood education and help for parents is important.  Investment in public education should include paying top teachers more to teach in low-income schools, and ending “pay to play” actions.  More intensive mentoring of youth should occur, along with “on-ramps” to opportunities such as community colleges and apprenticeships.