School Lunches Get Healthier, But Pizza is Still A Vegetable 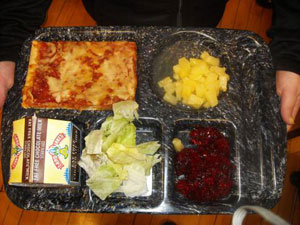 The program allots an additional six cents per school lunch—the first real increase in 30 years.  The new standards call for more whole grains and produce, as well as less sodium and fat, and are the first to be enacted as part of the Healthy, Hunger-Free Kids Act of 2010, part of Michelle Obama’s Let’s Move! Campaign, which was signed into law last year by President Obama. It will affect the nearly 32 million kids who participate in subsidized school lunch programs each day—many of whom get half their daily calories from these meals.

What’s different? Milk goes low- or no-fat, portion sizes shrink to limit calories, and fresh fruits and vegetables are offered every day, among other recommendations echoed in the Eat Healthy section of our 5 Easy Steps.

What’s not? Potatoes are unlimited—although now the majority will be baked, rather than fried—and tomato sauce still makes pizza a vegetable. “It was a bit unfortunate that some groups had powerful friends in Congress and basically tried…create some confusion with these standards,” Vilsack said in a virtual press conference that I attended. “Our response was to set up minimum requirements. You have to have a minimum level of dark green vegetables, you've got to have a minimum level of red or orange or yellow vegetables.”

“OK, so Congress left pizza a vegetable,” Ray said. “But we are changing the game today. That [lunch] tray is going to have leafy greens and colorful fruit on it. If one of the other vegetables happens to be pizza or French fries in some schools that day, it doesn’t negate the fact that on the tray there…will include vegetables and fruits.” (For more specifics, check out WebMD’s excellent breakdown of the new standards.)

Regarding organics, Secretary Vilsack said they encourage organics but will leave the decision about integrating to the individual school districts. But he responded to my question about Genetically Engineered foods by saying they would leave this up to “consumer choice.”

I didn’t get a chance to ask him how we can have a choice, given the fact that GEs are not required to be identified on labels—yet are now in 80% of processed foods.

Or to ask if he was aware that 93% of Americans now say they want GE foods to be labeled. (Are you one of them? Sign the Just Label It petition today!)

Sigh. I guess we have to start somewhere. And these new standards are definitely better for our kids.

Hopefully that pizza will have a whole-wheat crust.

P.S. Congratulations from all of us at Healthy Child Healthy World to Mr. Wells’ 4th grade class at the Park School in Brookline, Massachusetts for changing Universal Pictures' mind about eliminating green content from “The Lorax” movie. As our founder Nancy Chuda wrote last week, when the kids saw the trailer, they realized that the environmental themes--which, as any parent who's read this story at bedtime knows, are the bedrock of the story--were largely missing. To restore the original meaning to the film, Mr. Wells’ class put together a video and petitioned Universal to add more environmental messaging to their website. And this week, after more than 57,000 people signed their petition,  the Universal webpage was updated to reflect the students' requests. Dr. Seuss once wrote, “Unless someone like you cares a whole awful lot, Nothing is going to get better. It's not." We're inspired by these kids, who cared enough to make it better. A lot.