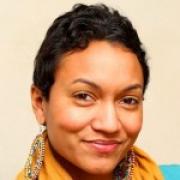 Nuala Cabral
Share This
Add your voice to the comments

These messages we chalked on the sidewalk during a demonstration for International Anti Street Harassment Week in Philadelphia this past April (Sexual Assault Awareness Month) resonate with anyone who has felt dehumanized, objectified and targeted - while walking down the street.

This was my third year helping to organize a street harassment demonstration with FAAN Mail (Fostering Activism & Alternatives Now), a media literacy/activist project I co-founded with women of color. This year several young people joined us, including Crystal, 17.

“By writing these messages we are taking the streets back and helping people see street harassment as a problem,” she said. A participant of Girls Advocacy Leadership Series (GALS), Crystal, has been working on an awareness raising campaign about street harassment with her peers. This April was her first time joining the international effort. 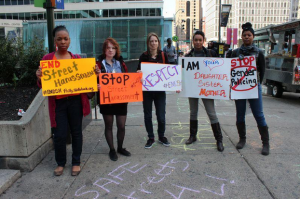 In conversations, we discussed with strangers that women and girls are not the only targets of gender based street harassment. Trans and non gender conforming people often encounter street harassment, and research shows that when they do - it tends to be more aggressive and violent. Crystal’s poster, “Stop Gender Policing,” provoked conversations about the ways in which gender expression and sexuality shape experiences with street harassment.

Nina Lyricspect, a teaching artist who joined the community engagement efforts said her highlight was taking the message to the subway where dozens of passengers shared a “roar in applause and agreement with our cause.” Nina was gathered by community members from Hollaback Philly, GALS, FAAN Mail, the Philadelphia Youth Poetry Movement and several male allies. The subway ride was an opportunity to create dialogue around ads recently launched by Hollaback Philly. Already the ads have caught national attention, but we wanted to engage people on the trains about the messages.

Later, during a debrief about our efforts, FAAN organizer Mari Morales Williams shared that, “Disempowered people sometimes use power in unhealthy ways. This can apply to men of color and poor people, who are struggling to overcome oppression and maintain dignity and power in the ways they know how.”

As women of color, we recognize the connections between racial profiling (where men of color are targeted by powerful police) and gender based street harassment -- where women, girls and gender queer folks are targets of grown men and boys.

Within FAAN Mail this has been a recurring topic of conversation, as some critics, mainly men, have argued that we should instead focus on police harassment and racial profiling. 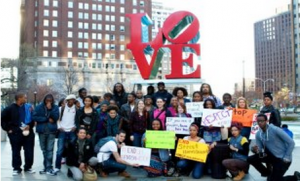 But we reject the idea that fighting gender based street harassment means that we must overlook the police brutality men of color face. This is not about choosing one struggle over the other. All forms of harassment hurt our community. This year, male allies joined us in solidarity to make this message clear.

We also recognize that the way women are degraded in the street is connected to a larger rape culture that dehumanizes all women and feminine expressions. Women are sexually objectified in media on a daily basis, and for women of color this is even more extreme. There is no question that the objectification of women, and of women of color in particular, carries over to our lived experience.

And it’s not just visual media that routinely over sexualizes women of color.  When the Onion jokingly referred to 9 year old Oscar nominee Quevenzhané Wallis as a “cunt,” during the Oscars, we were reminded that even girls of color are not protected from sexual objectification in media. When mainstream media hardly reacted to this story, it confirmed for many women of color that if we want change, we need to come together, support each other and demand/create it.

During the week of street harassment efforts, many women of color were simultaneously resisting Universal Music Group artist, Rick Ross, who boasted on a track about date rape:

Public figures like Rosa Clemente helped galvanize public outrage which led Rick Ross to tell his fans in a radio interview that his lyrics didn’t “condone rape” arguing that his words were misinterpreted. As public outrage grew it became more organized. Ultra Violet launched a petition calling on Reebok to drop Rick Ross as their spokesperson. After 90,000 signatures, a direct action at the Reebok stores and a series of articles, blogs and video responses on the internet, Reebok finally dropped Ross on April 12. That same day, Ross issued a more thoughtful apology, affirming that his lyric did indeed promote the drugging and sexual assault of women.

While the Reebok success was a small win, we are reminded that this is ultimately bigger than Rick Ross and the companies, (i.e. Ciroc) that still support him. We are operating in a corporate media landscape that routinely promotes and glorifies rape culture.

When rape culture is promoted through media it reinforces the painful power dynamics that Mari talked about, where oppressed people cut each other down in order to regain some dignity and power.

These harmful media messages both reflect and shape our lived experience, including our experiences with street harassment.

“I need the streets and airwaves to not prey on my 6-year-old niece,” shared Nina during our community engagement efforts.

As Sexual Assault Awareness Month comes to a close, the struggle continues. We will continue to resist rape culture, and the ways in which it manifests in media and in our everyday lives. Remaining silent and patiently waiting for change is not an option. We want change now.