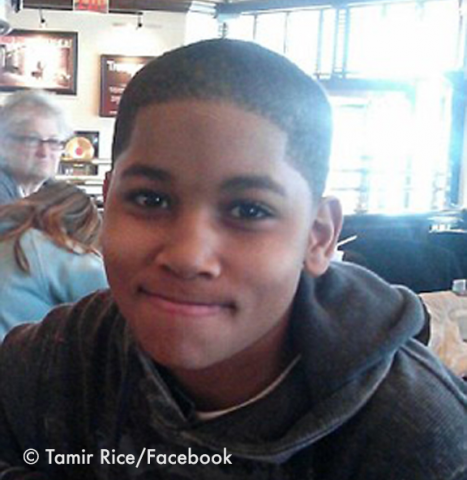 Reckless killers of 12-year-olds should not wear police badges.

A reckless killer of children should not carry a badge. Yet, that’s exactly what Cleveland’s police union is trying to do — get Timothy Loehmann, who shot to death 12-year-old Tamir Rice while he was playing in a park, back on the Cleveland police force.

The very idea makes me both sick to my stomach and want to scream. It’s unthinkable, unacceptable, and just so. wrong.

Tamir Rice died in 2014, but his death still haunts me. A mother lost her child at the hands of someone whose job it was to protect people — a child who was doing nothing more than what children do: playing in the park. Tamir had a toy gun in his hands as he was playing in the park when a patrol car pulled up to investigate. Officer Loehmann shot Tamir less than one second after getting out of his car. Tamir died the next day.

Not only was the shooting cowardly and reckless, Loehman should never have been trusted with a badge and a gun in the first place. The investigation revealed that the officer had lied on his job application to the Cleveland Police Department, hiding the fact that another police department had determined he was emotionally unfit, as well as incapable, of being a police officer.

*Help Samaria Rice tell Cleveland’s police union president: “Stop defending the officer who killed Tamir Rice and trying to get him back on the police force. Putting Timothy Loehmann back on the streets with a badge and gun would threaten public safety, and send the dangerous message that police officers are above accountability for their actions.”

Police unions often succeed in helping corrupt and dangerous officers get their jobs back once the public’s attention has moved on. But we can stop that from happening in this case — and also make it less likely in the future — by helping Samaria Rice publicly confront the Cleveland Police Patrolmen’s Association.

And taking action works! Loehmann recently tried to start another job at an Ohio police department, but was stopped when Samaria Rice spoke out in opposition, her voice amplified by thousands of people in Ohio and across the country. It’s time to take action and help Tamir’s mother speak out again.

*Click to take action and sign on to Samaria Rice’s message to “Stop defending the officer who killed Tamir Rice and trying to get him back on the police force.”

You can help Samaria Rice! We’ll give your signature to her to help her confront Cleveland’s police union and keep her son’s killer Timothy Loehmann from rejoining the police force. The more of us who sign on, the louder Samaria’s voice.

Please forward this email to everyone you know who would be appalled that this is even happening — and that a police union would be so cold-hearted and callous as to fight to get a reckless killer of children back on the police force.

Together, we’ll never stop fighting for mothers, justice, and decency.