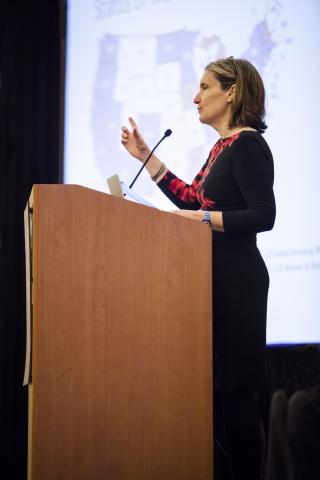 Q&A with Joan Alker about repealing the Affordable Care Act

This Q&A originally appeared on Bundoo.com.

Question: From a policy point of view, it seems inevitable that the Affordable Care Act, or Obamacare, is heading for repeal or major changes. How has the law helped children and families?

Answer: Congressional leaders have made clear that repealing the Affordable Care Act is a top priority for them moving forward. So we will definitely see action, but what that action will be I think is still unclear. Talk is cheap, but governing is hard, and health policy is really hard. So it is not that easy to repeal the Affordable Care Act without undermining some very important and positive changes that we have seen for children and families.

One of the great success stories of the past two decades that the public is not aware of is the increase in the number of children who have health care coverage. We are now at a historic high of 95% coverage levels for kids thanks to Medicaid, the Children’s Health Insurance Program and the Affordable Care Act. If Congress charges ahead with plans to repeal the Affordable Care Act and make substantial cuts to Medicaid without simultaneously passing a solid replacement plan, our nation will make a U-turn away from this path to progress. The number of uninsured children would more than double, according to projections by respected economists at the Urban Institute.

Healthy parents and caregivers are also essential to children’s healthy development and family well being.  An estimated 7.6 million parents could lose coverage in 2019 if Congress’s budget reconciliation process repeals pieces of the ACA without a replacement plan.  Many other adults whom children rely upon for care, such as preschool teachers or day care providers, would also lose health coverage if the ACA is repealed without a replacement plan attached.

I don’t think this course of action is “inevitable” as the more the American people learn about what is at stake, the more pressure will mount on Congress to replace health coverage before taking it away and undermining the health and financial security of so many children and families.

Question: The current strategy seems to be “Repeal and Delay,” meaning that the ACA is likely to be symbolically repealed, with a window of 2 or 3 years before the bill is replaced. Do you think this strategy might change how it affects families?

Answer: The delay is really more of a gimmick that deflects attention away from the real issue of the lack of a solid replacement plan that would meet the health coverage needs of American families. If Congressional leaders move forward with repealing the ACA without first negotiating a replacement plan, the health care system could fall into chaos and more Americans will become uninsured and struggle with higher health care costs. Valued reforms, particularly preventive services such as no-cost well child visits and a ban on pre-existing condition exclusions by insurers, are on the chopping block.

A growing body of research illustrates how repeal of the ACA would impact families.  Recently the Urban Institute and Brookings Institute Tax Policy Center estimated that repealing the ACA would provide large, lopsided tax cuts to households with annual incomes over $1 million and would significantly raise taxes on about 7 million low- and moderate-income families due to the loss of their premium tax credits to buy health coverage through the marketplace.

Without a replacement plan to analyze, there is no way of knowing what will happen to families.  That is too big of a risk to take.

Question: Have you seen any proposed alternative ideas that might help children and families if the ACA really is repealed in full?

Answer: Coming up with a solid replacement plan is something that has eluded Congress for the past six years, and I see no evidence that has changed. Health care coverage is complex and there are no easy answers. No law is perfect, but the ACA took our health care system in the right direction by holding insurance companies more accountable, preventing discrimination against people with pre-existing conditions, strengthening Medicaid coverage and reducing the number of uninsured people. Congress would be more successful if they approached this complicated task by amending what’s already in place rather than rushing through a repeal.

Question: Is there any advice you have for parents in preparation for the ACA repeal?

Answer: Families rely on health insurance to protect their health and financial security and it is unsettling when that is put at risk. Parents should let their elected leaders know how changes being contemplated would impact their families. Also, it’s important to remember that some children’s programs are funded separately from the Affordable Care Act. Even if you lose your insurance, your children might still qualify under a different program. This is not a time to panic and assume the worst yet, but it is absolutely a time to become very well informed and engaged about options that are being considered by Congress and how they would affect your family. You can keep up with debate over health reform and how various proposals would impact children and families on the Georgetown University Center for Children and Families website (ccf.georgetown.edu).

Joan Alker is the Executive Director of the Center for Children and Families (CCF) and a Research Professor at the Georgetown University McCourt School of Public Policy. Her work focuses on health coverage for children and families, with an emphasis on Medicaid, the Children’s Health Insurance Program (CHIP) and the Affordable Care Act (ACA).